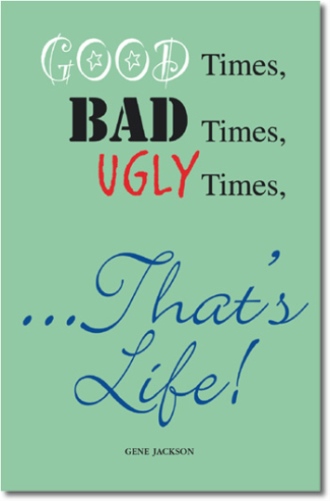 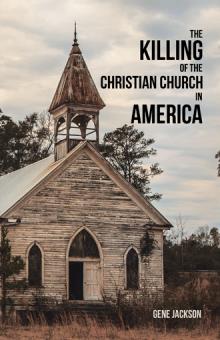 THE KILLING OF THE CHRISTIAN CHURCH IN AMERICA
Gene Jackson
$20.99

Rich in memories of family values and traditions, the author reflects on his experiences and relationships while growing up during the Great Depression. At an early age, he entered the military to get away from home and surroundings that bred poverty. Upon leaving the military the author enters a full-time ministry, only to leave it in order to enter the secular realm as an educator, entrepreneur, and farmer. Continuing his search for fulfillment and challenge, the book describes how the author gives up farming to become and executive officer with a company in a specialty market. This venture takes him to many far-away places and several trips around the world before semi-retirement.

This book is about reflections and recollections of the authors life and treasures hidden in the depths of his mind. He leaves to the reader the choice to classify these, his memoirs, as to Good, Bad, or Ugly times.

The author recalls his life, replaying it in the stages or the profession that he was in at the time. "We all have to be truthful when the facts are there and events have actually happened," he says. It is difficult to deny the truth when it occurs and history is recorded. Others may describe events in their words and ways, because there are three sides to every story: "your side, my side, and the truth." The truth needs to be told and heard all of the time.

The author, Blanton Eugene Jackson, was born in a small town in South Georgia, USA, living his life there until almost twelve years of age. Moving with his family to Atlanta, he entered junior high school almost at the time that World War II was beginning. Before finishing high school, he entered the military, becoming aware that there was another world that existed outside familiar connections. This was the beginning of a journey that took him around the world several times before his semi-retirement at the age of seventy.

He was given the nickname of "Gene" by his family and his childhood. vocations of military, ministry, educator, entrepreneur, farmer and executive, are recounted here. The author writes about his experiences in these professions as objectively as possible.

His first writings appeared as weekly articles in two small town newspapers in Alabama under the heading: "Reflections Along the Way." These writings were fictional as well as non-fictional and were intended to show the goodness of God in every day life.

The author is being opinionated when he proclaims that "farming" was the easiest and most boring of any vocation that he undertook. When the crop is set aside, the farmer can call in the crop duster and take to the woods or streams to hunt or to fish. Nevertheless, he remains mindful of the stress and anxiety and dependence of elements and variables that the farmer has no control over. While maintaining a great respect and admiration for the farmer, he has yet to meet a farmer who claims he has made any money farming.

The author's feelings for privately-held companies don't garner the same admirable respect as that given to the to the farmer and his dedication. Having worked for a private company for eleven years before semi-retirement, he has no desire to ever work for one again. Being an entrepreneur at heart and knowing that a company needs employees, this might appear to be a contradiction.

His belief is that most entrepreneurs who make up private companies, especially the smaller ones, are self-centered, egotistical individuals, more concerned with personal and family interests than those of their employees. Loyalty is demanded, while security at retirement is seldom promised or provided. Public companies, he believes, provide their employees with more benefits than private companies are willing to give. "Relatives, whether knowledgeable or business oriented, are first in line to assume the realms of authority in private companies," he claims.

The author also believes that the ministry is a calling from God and not a self-chosen profession. Parishioners endeavor to establish a double-standard for their ministers, desiring to be lifted higher spiritually than they, the parishioners, are willing to be lifted.

Preachers, who have chosen the ministry as a vocation and are not God-chosen, are not spiritually equipped to lead their congregations. It remains, therefore, for laypersons, led by the Holy Spirit, to spiritually feed the flock.

The author has 'rubbed elbows" with friends and foes in all of his chosen professions, whether in the military, ministry, education, farming, entrepreneurship, or privately-held company. His comments are self-drawn conclusions, formulating his opinions about his contemporaries through his experiences. These experiences that you will read about, were not placed in his mind by pen and ink, but by the anxieties, stress, and strain that went into the many phases of his life.