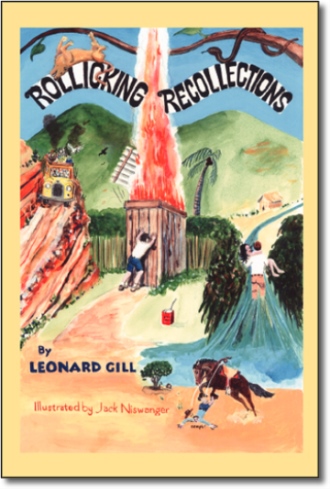 More humorous snapshots of a boy growing up in Kenya, and the people he meets on his way to adulthood form a joyous and often engrossing celebration of life in general.

"The book covers the emergence of the young adult years of my life from 1940, the attitudes I adopted, and events I and my family experienced, together with tales about some of the famous and infamous characters we met. My own adventures in which I faced serious injury and even death didn't make me more circumspect.

I walked through life confident in my immortality, like a cat with twenty-nine lives, and with a sense of fun and growing responsibility.

Hesitant steps toward youthful romance were met with mild disappointment and an arrogant belief that girls were of little value beyond being useful targets for pranks."

Born in Kenya, East Africa, of English parents in December 1930, Len lived there until 1989. During his childhood, among his family and African servants, he ignored the dismay he caused them.

He enjoyed life. Even a period at boarding school offered Len scope for devilment. His absence at school relieved those at at home of the complications that always seemed to attend his presence. His school teachers and friends had to bear the burden.

By the development of youthful arrogance, and in blissful ignorance of the vexations he caused, he was unaware ot the necessity to balance humor with seriousness.

African's dubbed him with the nickname Mpenda raha (he who enjoys a good time). Len insists that a shot-glass of humor helps the worries go down.

The inspiration in his life, Kaye, recognised Len's flair for storytelling, and insisted that, having reached three score years and ten, he get down to writing his momoirs.