A Journey and a Trek to the Himalayan Shrines of Badrinath, Kedarnath and Hemkund Sahib 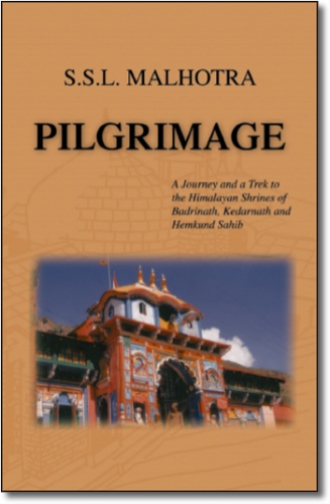 This book is an account of an interesting and adventurous journey and a trek by seven friends to sacred shrines of Badrinath, Kedarnath and Hemkund Sahib, situated at between 10,000 feet and 15,000 feet in interior Himalayas amidst snow peaks and unparalleled scenic beauty, These are sacred pilgrimage centers on the banks of the sacred river Ganga and the Hemkund lake, visited every year by hundreds of thousands of Hindus and Sikhs from India and abroad. Of great interest to general readers interested in the myths and legends associated with the River Ganga and the Himalayas. Also of great interest to foreign tourists and trekkers.

A civil servant, a financial administrator, traveller and a writer, S.S.L. Malhotra, has had a varied and an interesting career. Born in1928, he spent his childhood in Shimla, the well known hill station and the summer capital of the then British Administration in India. And thus began his love and long association with the hills and mountains which were to take him later to the various journeys and treks to the Kashmir valley and Kulu - Manali and much of the Himalayas. His deep interest in Indian culture had aroused in him a yearning to visit the ancient Himalayan shrines of Badrinath, Kedarnath and Hemkund Sahib. He considers his visit to these shrines situated between 10, 000 feet to 15,000 feet in the interior Himalayas as the culmination of his trekking ambition. The present book published earlier in India under the title "At the Feet of the Badri", and now revised, is the first account in the English language of the fascinating valleys of the Alakananda and the Mandakini, the two of the three branches of the Ganga. This achieved the purpose the author had in view in arousing interest among the educated youth in visiting these shrines and acquainting themselves with their cultural heritage. Later the author visited Gangotri and Gaumukh and that resulted in the second book in the series recounting the adventurous visit to the holy source of the Ganga itself.

In the early years of his career, he served in the Indian Foreign Office and spent nearly seven years in the Embassies of India at Cairo and Beirut. He has also travelled in Europe, the Middle East and in South East Asia.

He also contributed extensively to the leading Indian newspapers, the Indian Express of Mumbai and the Amrita Bazar Patrika of Calcutta.

He ended his official career as a Director in the Ministry of Finance, Government of India at New Delhi from where he retired a few years back.

He now spends his time travelling, and in writing.