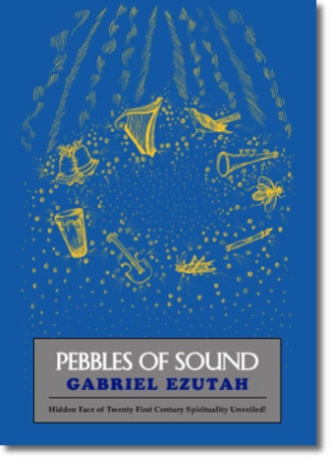 Pebbles of Sound is the fulfillment of the poet's countless-lifetime-search for the true meaning of life, the nature of Soul, our relationship with Spirit, the Light and Sound of God, as heard and seen by old Moses, that blinded St. Paul, but still seen and heard today by countless devotees, including the author. Karma and reincarnation, dreams and visions, the need for and place of the true Master, in the life of a sincere seeker of Truth. Who really is the true Master? The Godman! The Wayshower! And how to recognize him. The Spiritual Laws, the Spiritual Exercises and their proper applications to achieve desired results. The correct use of the imagination and much more.

There are 252 poems in all, plus Foreword and Afterword. Written in a unique style of regular nine lines each, with corresponding nine metres and triplet rhyming, the poems fly on the high wavelength of the sacred number 9, and through countless voices of familiar and unfamiliar images, pelt the reader with painless pebbles of sounds of divinity, dazzle with the blinding light of spirit, to galvanize the truly adventurous soul, to dare beyond the dark veil and grasp truth and freedom like a brave eagle clutching a swift gazelle. Be warned, some of the poems may appear to insult, outrage, or demystify, but they uplift and inspire, nonetheless, because the poet speaks directly to soul, hardly to the rigid mind, and never to the brief body.

Gabriel Ezutah was born in the eastern town of Ohafia, Nigeria, on the 11th of February, 1965. His father was a petty trader and his mother a small subsistent farmer. He was only two years when the Nigerian civil war broke out. Three years later, and being on the seceding side of Biafra, his parents fled with him and his four brothers into the bush where they lived for several months as the war raged on. Having witnessed many offensive scenes of exposed corpses and blood as a child, he had this question carved on his young but forced-to-mature- early mind: what is the meaning of life. His father, Nna-Dick Ezutah though poor, had a great influence on his future career as a writer, in that he told him countless stories about life, past life and reincarnation, which Gabriel is forever grateful for. His family's poverty, coupled with perennial extended family's squabbles which sometimes turned dangerously violent made him an eternal restless individual. Much of a rebel. Nevertheless, he dragged through primary school; thanks to the Universal Primary Free Education that was in place then in Nigeria. His parents struggled to see him through secondary education. And that was it. But he had already fallen in love with books and reading which according to him saved and restored his sanity. "I read thousands of books in a few years. Sometimes I made girlfriends just so I could read books from their rich family libraries," he reminisces. Gabriel never had a room to call his own until he was thirty six. " I was always on the road," he says.

In 1985, Gabriel moved to the oil-rich city of Port Harcourt to live with his elder brothers. Finding it difficult to get a job, he stayed at home for years reading and writing poetry. Later he worked in all areas of the catering industry for over seven years, which even took him to work in an oil rig. He has also worked as a gardener, salesman, smalltime businessman, housekeeper and a builder's hand. He also co-edited a spiritual magazine for about five years. In the early 1980s, he came in contact with the Teachings of Eckankar, the Religion of The Light and Sound of God, whose headquarters is based in Minneapolis, Minnesota U.S.A. According to Gabriel, my life completely changed for the better. My one billion nagging questions about life were answered in one night. My life changed from loathing to loving and living. I moved from passive protests to active and creative participation in life. For the first time I knew the true meaning of happiness. His master, Harold Klemp, whom he claims descended from the same spiritual brotherhood as Shamus-I- Tabriz, Who was Rumi's own master, is the greatest influence in his life and writing. "Life is a mystery until we realize that we alone create our own world!" He fondly quotes Klemp. Gabriel now lives in Kinsale, the republic of Ireland. He works as a production manager in a craft factory.