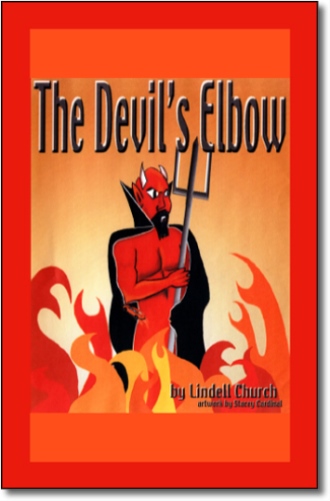 This mystery novel tells the story of Lee Blake's life in the Mid-West.

As the two are driving home for break, they are involved in a crash on the Devil's Elbow, a particularly treacherous curve of highway. Cathy is killed and Lee is convinced that he was driving when the accident occurred. Since he had been drinking at their going away party, he honestly could not remember whether he or his fiancé was driving. The sheriff is convinced of Lee's guilt and Lee is promptly charged with manslaughter. If convicted, Lee will be unable to practice law, even after his sentence is served.

The balance of the novel involves Lee and his friends' amateur detective work in tracking down witnesses who could prove Cathy was driving. Their investigation also turns up a crooked sheriff, who has refused witnesses' testimony that would have vindicated Lee.

Not only is the hero faced with the loss of his fiancé, he must deal with the existence of her identical twin and that twin's eagerness to pick up in Lee's life where her dead sister left off.

"Lindell Church's book, The Devil's Elbow is an engrossing journey through a realistically presented moral dilemma. His story is told quickly and captivatingly with a clear and engaging style."

"This is an outstanding book - It keeps the readers on their toes, wanting to read more to find out what was in store for the main character. I would recommend this book to anyone who enjoys a very well told story."

The author is a lawyer, with a wide variety of experiences and clients for a Mid-Westerner living in a small city and relives some of his life through Lee Blake.