Sowing Nightshade in the Wastelands of Cities 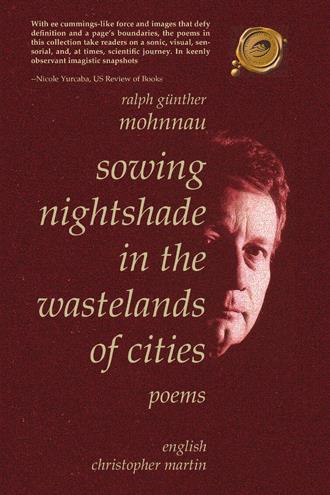 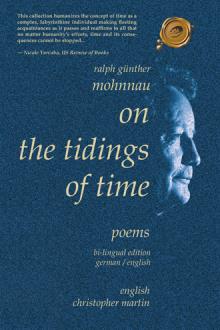 On the Tidings of Time
Ralph Günther Mohnnau & Translated by Christopher Martin
$16.00

"Mohnnau introduces a rather novel voice into the contemporary lyrical concert. His poems are refreshingly non-hermetic and almost devoid of any political agitation. He has a distinctly characteristic tone: his verses are eminently personal, his language is straightforward and at time earthy, and his imagery is laden with the accoutrements of thee world of science and technology. His erratic use of typography is perfected to the point of mastery and his poems show a distinct trait: the ability to treat his themes with an appealing blend of wit, humor and irony. To a prolonged stay in New York City, we owe several poems which accurately capture the mood of this metropolis. One may or may not agree with Mohnnau's philosophy, but the fact remains that his poems prove to be both stimulating and provocative".

Ralph Günther Mohnnau was born in 1937 in the town of Bad Kreuznach, Germany. First poetry and articles at the age of 14. Early interest in poetry, painting and ballet. Studied English and Romance languages, in addition to law and philosophy, at the universities of Mainz, Freiburg and in Paris (Sorbonne). Study trips to Greece, Egypt, the United States and Canary Islands. Personal encounters with Martin Heidegger, Alain Robbe-Grillet, Charles Bukowski, Joan Miró, and John Cage.

In addition to poetry, Mohnnau's interests are dedicated to the musical theatre and opera. He has written several libretti- including the operas: CAROLINE (music by Michael Obst, Weimar), and WENN DIE ZEIT ÜBER DIE ÜFER TRITT (music by Vladimir Tarnopolski, Moscow). His rock opera H—OR, THE RAINBOW JUMPER (directed by OBIE-Award winner Manuel Lütgenhorst) was first performed in 1985 at the Ohio Theatre off-Broadway. A drama, CRY OF THE MANTIS (Zeit der Muscheln) had its American premiere in 1990 at Seven Stages Performing Arts Center/Atlanta under the direction of Christopher Martin with music by Matthias Raue.

Christopher Martin, director/designer and composer, was Founding Artistic Director of CSC REPERTORY/New York, where he mounted nearly a hundred productions of the classics over the company's first eighteen years, frequently appearing as an actor. Since 1985, his work has taken him to National and State Theatres across Europe and to the Far East. As a translator, he received a Pulitzer Prize nomination (with Daniel Woker) for the Heiner Müller text of Robert Wilson's THE CIVIL WARS and a National Theatre Translation Fund Award for his versions of German playwright Botho Strauss. A designated translator of the plays of Garcia Lorca, he has also rendered Rostand's CYRANO DE BERGERAC, as well as works by Roger Planchon and Moliere, Strindberg, Büchner, Wedekind and Dürrenmatt.