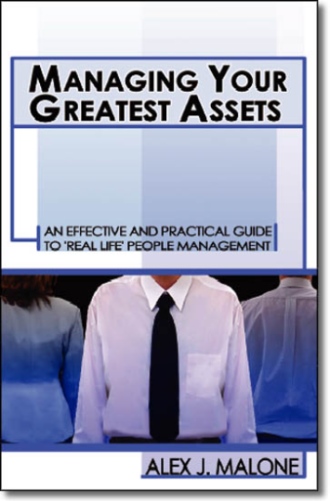 Managing people is one of the most difficult, yet one of the most satisfying elements of your management career. It takes experience, tact, passion and dedication to achieve success. Whether you are new to management or have aspirations towards it, whether you manage only one person or a team of one hundred people, this book is designed to help you. The content is the result of 15 years of dedication, exploration and personal experience in the area of people management and team building. It is designed to help teach you the essential areas of focus to achieve success relevent to the real world around us. It is not based on scientific theory, psychological studies or statistical analyses. It is based on 15 years of 'hands on' experience of what really works, and what doesn't.

My hope for this book is that it helps you to become a great coach and motivator and to develop individuals and teams that you are proud of. I wish you all the success in your management career.

Alex J. Malone is a native of Liverpool, England, now working and residing in Orange County, California. A graduate of chemistry and biology, he has dedicated most of his professional life to people and team development and has managed hundreds of people over a 15-year management career. For the last 5 years, he has been a passionate advocate and leader of many people management and development initiatives. He describes his 15 years in management as follows:

"My first management position was when I was 27 years of age, and is still, to this day, the most challenging job I have ever had. I was given the responsibility of production shift manager, with approximately 30 people reporting to me, none of whom were in the ranks of management. Since I had no 'second in command', it was a make or break position. It was this role that taught me, the hard way, that people management takes great tact, skill, and dedication. After my next position, one in which I managed only four people for two years, I moved on to another role managing 25 technicians and one other manager. For the last five years, I have managed a team that includes 16 managers. At the same time, I have become heavily involved in many people development projects such as mentoring, rewards and recognition, appreciation, and coaching and development. So, essentially, I have spent the majority of the last 15 years in positions where I have managed relatively large groups of individuals in rank and file positions. I believe any success I have had in these endeavours can be attributed to a dedication to helping people to succeed in their careers.

It has been a long, hard road, but I think I can now justifiably claim some successes in the areas of people and team development. I have made my share of blunders, but I have acknowledged them, faced up to them, and learned from them. It is not a coincidence that my successes have become more frequent as my experience of managing people has developed. To those people I managed at age 27, my apologies! I was naïve and inexperienced, but I've learned from it.

I hope that by passing on my hard earned lessons, valuable experiences and well-intentioned advice, that I can help to inspire a new generation of exceptional people and team managers. I wish you all great success in your management careers".