Before the Fields of Crosses 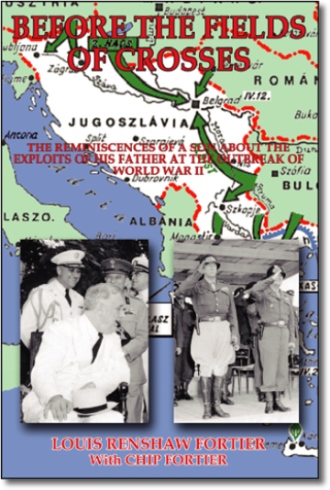 This is the story of a US military officer, as seen by his son, serving in Europe before and during World War II, with particular emphasis on the officer's heroic actions in stopping the bombing of Belgrade, Yugoslavia.

During the onset of World War II, Fortier's father, a U.S. Army officer, was stationed first in Paris and then in the Balkans. As he gathered intelligence he was at first rebuffed at his efforts to get the War Department to recognize the validity of the intelligence he was sending back. However, after having predicted the opening day of the war (Invasion of Poland on September 1, 1939), the swift penetration of the Maginot Line by German mobile forces (1940), and finally determining the composition and fighting organization of a German Panzer Division from first hand observation (1941), he became a significant part of America's intelligence for the war.

In the course of these intelligence activities he was credited with persuading the Germans to stop the bombing of Belgrade by the Bulgarian air force, thus saving many Serbian lives. For these actions he was highly decorated by both the Yugoslavs and the U.S.

The book is authored by the officer's son, Louis Renshaw Fortier, who was with his father during much of these activities. Louis Renshaw Fortier gives his impressions of traveling to Europe and the reactions of himself and his sister to living in France and Yugoslavia during the build up years of World War II. The author also describes some of his mother's exploits in returning to Belgrade through war-ravaged Serbia after her train was bombed, and his own experience of being charged with the taking out of eight children of the Legation when dependents were ordered home.

The story begins with the background of the life of a junior military officer during the peacetime years, and family life during the inevitable travels from station to station. The son concludes with his descriptions of both his father's and his own experiences upon return from Yugoslavia (1941) throughout the remainder of the war (1945).

T. St. John Arnold - Colonel, USA (Ret); author of The Buffalo Soldiers, Austria; and World War II veteran of the Italian campaign. "Few people understand the Balkans and the strife of World War II prior to the American entry into the conflict. Through the use of historical summary, up-to-date key situation reports, and personal observation as a young teenager, the author has advanced greatly a layman's understanding of the events of that time, and with some humor details his father's fascinating career during it all. A different and exciting book."

Norman J. Anderson - Major General, USMC (Ret): "Ren Fortier has created a remarkable tale herewith, remarkable in many ways - in large part a family history, but also a valuable recording of America's pre-WWII intelligence in Europe. Before the Fields of Crosses is quick resounding reading bringing to light the essence of a long ago war; fascinating reading."

William J. Davis - Colonel, USMC (Ret); Executive Director of the General Douglas MacArthur Memorial, Norfolk, VA. "An important work revealing what little we understood of Jugoslavia and the German Army during World War II. The war covered the entire globe and the most famous figures have been studied and chronicled, but it was people like the author's father, a student of history and keen observer of the events around him, who could explain to our leaders what was really going on."

Mrs. Debbie Hague - History Teacher, First Colonial High School, Virginia Beach, VA. "This is the way history should be written and taught. The author of Before the Fields of Crosses has, in his forty page prologue, condensed and illuminated the progress of the war from its background in the thirties, through the successes of the Axis in the early forties, to the Allied victory by 1945. This is followed by a teenager's view of his father's exploits both in the Balkans and the German battlefield which is explicit, humorous, and factual. Concise and clear, it is almost like reading Cliff Notes on history. I am recommending it to every high school history teacher, and require all my students to read it."

Mrs. Price Kloess - Housewife, Mother of three teenage children:
"I found this book to be fascinating. Though I had a thorough education, my generation did not really study World War II with all its horror and future impact. This book gave me a "feel" for what life was like in Europe as the war clouds developed, and then factual information as the war unfolded. I believe it should be a basic text in history for all teenagers."

Ned Langhorne - Retired businessman and artilleryman of World War II:
"Having served as an artillery officer with the XII Corps and Third Army in France, Luxemburg, and Germany, I found Before the Fields of Crosses simply great reading. The book is very informative, historical and accurate.
The author has written a book that is very interesting to any artilleryman and easy reading - a real pleasure."

P. W. Parcells - Rear Admiral USN (Ret):
"Before the Fields of Crosses is an insightful and interesting history of the early stages and conduct of World War II that is told from a personal perspective. It is a "must read" for anyone interested in that era."

William A. Pogue - CEO Chicago Bridge Co.
"I was delighted with Before the Field of Crosses. I couldn't put it down and read it in one long sitting. A great readÉ The events and adventures of the author's father (and Mother) read like a James Bond movie. Incredible !!!"

Bill Reed - Review in The Beacon, August 7, 2003:
"Before the Fields of Crosses is a brief, fact-packed work that provides a glimpse of the elder Fortier's rise from a Tulane University Engineering student to respected U,S. Army intelligence and field artillery officer during Hitler's rise to power and eventual defeat. The author provides clear, concise "situation reports" outlining the military and political status of each major player in the World War II scenario."

Susan Strickland - Review in The Birmingham News, September 2003:
"The book is about Ren's true adventure as a teenager in Europe prior to World War II. He was 16 when he led seven children from Belgrade through several countries to Genoa where they arrived just in time to board the SS Washington, the last ship to leave Europe before the war."

"Your book is terrific. I love the way you put it together and kept what was going on in all the countries simultaneously. This is the way to teach history. Loved your comments at the end . . . And I am just a female; just think how the men must love it. It should make a great present for everyone's grandfather. JOB WELL DONE."

Louis Renshaw Fortier, born at Fort Stotsenburg, Phillippine Islands in 1924, was the son of a regular army officer. Until 1937 he led the traditional life that befalls an "Army brat". He travelled and changed of schools constantly. Then his father was assigned to the French War College in Paris, and later was the U.S. Military Attache to Yugoslavia - until forced out by the invading German forces.

Until 1940, when he was ordered to leave Belgrade, he and his youngest sister lived with their parents overseas during the critical political years that preceded the war. During the war he became a cadet at West Point, and himself served as a regular Army officer for another eleven years. Upon returning to civilian life, he founded the Teren Company which does leadership development for large corporations and was a frequent guest lecturer and consultant on management. He also served on several corporate and many charitable boards.

He and his wife raised five children before she was taken by cancer. He retired from commercial life and devoted his time to charitable service. Later he remarried and now splits his time between his home in Virginia and hers in Birmingham, Alabama.