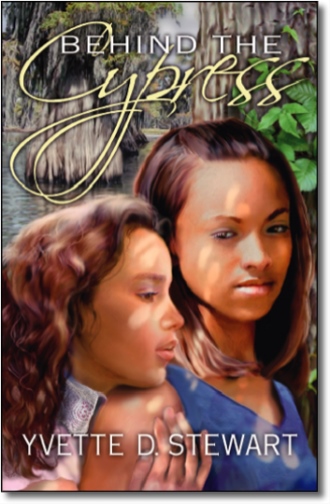 Behind the Cypress depicts how two African American sisters Jean-Marie Bensen and Sharmaine Martin find the need to forgive in order to live.

As someone who has overcome battles to forgive those who have hurt her the most, Yvette Banks knows just how important it is to forgive even when it may seem impossible or inconceivable. It is her personal struggles and triumphs that have inspired this poignant drama.

Marie and Sharmaine thought after finding their mama shot dead was bad enough but their new guardian gives them fresh and deeper wounds to cover the old. Pearline Toussaint Louvier is a proud and vindictive woman born in the center of New Orleans' black upper crust. She stops at nothing and uses anyone to protect her social position and reputation.

Aunt Pearl's mental and physical abuse almost sends the sisters over the edge. Terrifying her nieces is her full-time job and killing unborn babies is her part-time gig.

Years later, the women pay Pearl a visit to make peace and put the past behind. She's now serving the last month of a 20-year sentence for the murder conspiracy of the girls' dearest friend. Pearl apologizes for her crimes and tells them of the dark family secret that drove her to utter lunacy.

They forgive her but they will never forget.

Behind the Cypress exemplifies the human spirit when it is taken to the lowest level with only a sister's love and a faith in God to foster the hope for a brighter day.

Behind the Cypress is the captivating debut novel of the talented African-American author, wife, and mother Yvette Banks. Jean-Marie and Sharmaine Martin are two orphaned sisters who search for acceptance. Raised in the bitter care of their mother's sister, they are confronted with abuse, incest, and murder. Jean-Marie and Sharmaine must search for hope and strength within each other in order to rise above their cruel and present circumstances. Deftly written, Behind the Cypress is a thoroughly engaging and original work which is highly recommended reading.
James A. Cox, Editor-in-Chief,
The Midwest Book Review
www.midwestbookreview.com

Yvette Jones is the debut author of Behind the Cypress, and is currently working on her second novel Church House. She currently resides in the Washington DC metro area.