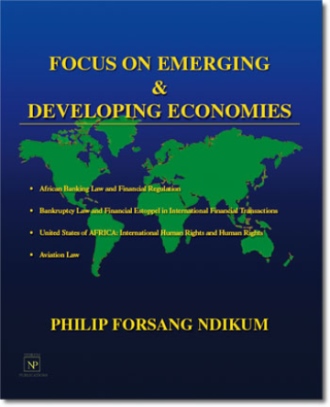 This book is intended to provide a useful resource to scholars in banking law and financial regulation in developing and emerging economies, bankruptcy law and financial estoppel in international finance, international human rights and human rights as tools for development in developing and emerging economies and the liability regime in aviation law.

Part one focuses on the problems plaguing the financial and banking system in Africa and makes proposals for reform. It argues that if the reforms are carried out progressively the African financial system will be transformed into an integrated and robust financial system.

Part two makes proposals for the introduction of Bankruptcy Law and Financial Estoppel in the area of international loan transactions between multilateral organisations like the World Bank, developed nations like the United States, Britain and France and countries from developing and emerging economies. It argues that unless these loans are governed by an independent court system with an elaborate bankruptcy jurisprudence and financial estoppel principle, the World Bank will continue to promote poverty in emerging and developing economies and improve the wealth of multilateral corporations doing business transactions in these economies. It is hoped that these new laws will introduce alternative approaches to tackle debt relief and consequently promote the installation of an independent court system to manage litigation and the debts of countries from the developing and emerging economies. In such a case debt relief will be governed by the rule of law instead. This part of the book argues that bankruptcy law and financial estoppel will offer sustainable solutions to individuals, corporations and countries in developing and emerging economies during financial turmoil.

Part three considers international human rights and human rights law as tools for social, political and economic development and integration. As such the project considers the vast potential in an integrated paradigm (United States of Africa) in developing and emerging economies. It is hoped that this project will promote the putting in place of an independent human rights court system with an elaborate infrastructure to promote human rights and hold individuals, corporations and leaders accountable for human rights abuses which will in turn promote social, political and economic integration of countries in Africa and establish the rule of law.

Finally, part four considers the liability regime in aviation law and makes proposal for reform. It also considers the disparities in the liability regimes in developed and developing and emerging countries and makes proposal for an independent court system to manage litigation in some cases. However, part four focuses mainly on the development and problems in the area of liability in relation to injury and death to persons. More precisely, it concerns limited, unlimited and absolute liability as outlined in the WC and concludes with a bias for dispute resolution and predictability in aviation matters.

Philip Forsang Ndikum is a Barrister-At-Law in England and Wales, called from The Honourable Society of Lincoln's Inn, London and a Barrister and Solicitor of the Supreme Court of Cameroon, called from the Court of Appeal, Douala, Cameroon, Africa. He is Managing Director of Ndikum Law Group: Ndikum Offices Limited, England, United Kingdom and Ndikum Law Offices, Douala, Cameroon, Africa. He was a research and graduate assistant at the University of Minnesota Human Rights Center. He clerked (foremost LLM. Programme, University of Minnesota, U.S.A) for the Hounourable Judge Nancy D. Dreher, United States Bankruptcy Court, Minneapolis, Minnesota, U.S.A. He has worked in Law firms in Douala, Cameroon; Paris, France; England, United Kingdom; and Minnesota, U.S.A.

He obtained an LL.M. Honours degree in Banking Law and Financial Regulation from The London School of Economics and Political Science (LSE). Before joining the LSE, he obtained a Post Graduate Diploma in Professional Legal Skills from City University London and obtained the BVC at the Inns of Court School of Law.

He was a distinguished law student at the University of Luton Law School where he obtained an LL.B (Hons), 2.1. He also obtained a Diploma in International Human Rights and Human Rights from Strasbourg, France. He studied at École Nationale D'Aviation Civile in Orly, near Paris, France.