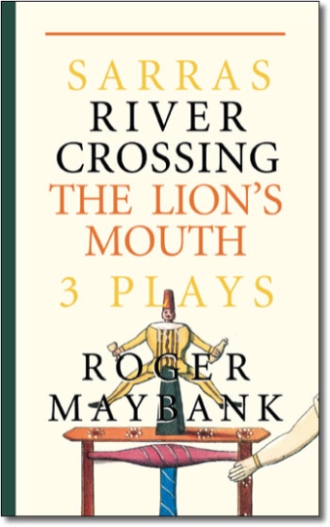 Sarras:
To cries from clowns that 'the king is dead.', a naked dummy falls from the flies, dangles just over the stage. The queen is distraught, half-mad; an animal-like prisoner is released, is tormented by the clowns, fights and kills a knight on stilts, is tutored by the hidden king, blends in dance with the queen.

River Crossing:
In a bright circle, centre-stage, a man walks beside his wheeled hobby-horse, talking to it as he tries to work out where he is and how he got there. In the darkened stage surrounding the bright circle, stage props of all kinds are scattered, which are brought up to the the edge of the light, as the man's mono-logue suggests he wants them, by a woman 'stage-hand', who begins also to play parts as his mind requires them; but always in the dark, 'offstage', sector, so that he misinterprets every clumsy-and comical-effort she makes to tell him why he is where he is.

The Lion's Mouth:
A man is sitting in a cave above the sea, bright with reflected sunlight. He has evidently been there a long time, gazing at the light.A 'country woman' comes to him, having made her way down the cliff, sent from 'the house' above, to bring him food, and to play a part, opposite his playing, of a young man out of his past. To help her in her role there is a number of masks in the cave. And a script. Becoming the 'young man', she struggles with the man to resolve what he is unable to on his own.

Biographical note about the author: Born in Winnipeg and lived there for twenty years. Not often since. After university in Britain, and some European wandering, he lived in Greece for some years, writing, mostly novels. Returned to Canada, to live on the west coast, and to write plays, and stage them.