An Interpreter's Chronicles of the Iraq War 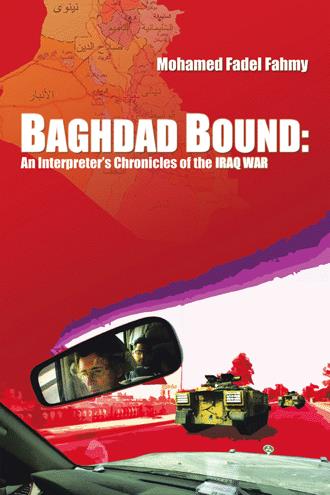 As the advent of an attack on Iraq approaches, a young Egyptian man working in the Gulf decides to take up a freelance job as a field translator for the L.A. Times and unsuspectingly embarks on an electrifying roller-coaster ride from Kuwait City to Baghdad. What was to happen to him and his team for the following three months is documented in his book Baghdad Bound. This is a gripping account of the remarkable events that he witnessed before and during the Iraq War:

The danger of frontline reporting
Dodging bullets and translating between reporters and Iraqis, the author recounts in detail the escape of BBC, CBC, Newsweek, and other news network crews from the Iraqi border after the threat of being besieged by a group of disgruntled and armed locals.
The devastation of the lives of Iraqi civilians
From Basra to Baghdad, a direct look at the horror of living in fear of coalition bombs as well as Saddam loyalists. The author begins to understand their psychological trauma after a first-hand look at casualties of war and along the way, discovers the real face of the Ba'athi regime.
The aftermath
In a lawless land, chaos reigns supreme as Iraqis, coalition forces and journalists struggle to make sense of post-war Iraq. The author recounts the mayhem of looting and rubs shoulders with Shi'a leaders and Iraqi exiles like Ahmed Chalabi vying for power while Saddam is on the loose.

Of all the books that have been published about the Iraq War, Baghdad Bound is a first. A mosaic of thrilling untold stories from the theatre of war, it is an earnest and unique collection of the action-packed memoirs of an Arab interpreter who finds himself caught in an intricate web involving the CIA, the L.A. Times, and Iraqis of various walks of life.

Here is a raw view of the war through the eyes of a regular man who stumbled into a defining chapter of modern history...

Mohamed Fahmy was born in Kuwait and holds a dual Egyptian-Canadian citizenship. He graduated with a B.A. in Marketing from City University in Vancouver, Canada. Since then he has worked between Canada and the Gulf and writes poetry and short stories in his free time. After obtaining the TESOL certificate, he sometimes teaches English to beginners. He currently resides in the Gulf and fulfills his passion for travelling and adventure by working on a film about the Iraq War.