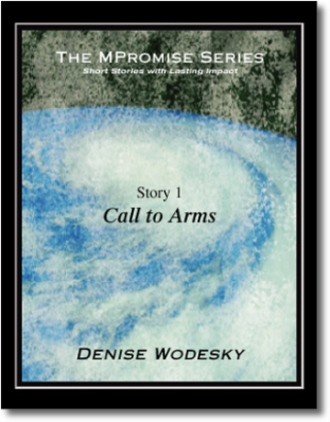 Call to Arms is the first of a collection of short stories in a futuristic adventure series entitled The MPromise Series. Seeking to illuminate the unseen world that exists around us, the series covers current events, describes what took place in the beginning, and proposes what life would be like in the near and distant future. Its ultimate goal is to provide lasting impact by showing the reader a foolproof means to defeat evil and strengthen righteousness.

The stories are presented from the vantage point of Uriel, an archangel who had survived the War of Heaven. He was keenly aware of Earth's ancient history and its imminent demise. Because a fallen angel called the Evil One had seduced, corrupted, and was seeking to destroy humankind, Uriel was now charged with executing the last stages of a rescue campaign for Earth's inhabitants and preparing the planet for its final conflict.

With the final conflict rapidly approaching, the only hope left for humanity was to receive MPromise-the ancient promise of Melchizedek, King of Righteousness-a promise of an eternal, royal inheritance in a new Heaven and Earth.

Upcoming stories of The MPromise Series are:

Ms. Denise Wodesky, a Christian since 1962, is the author of The MPromise Series and founder of the Association of MPromise, better known as AMP - a measurement of energy. AMP is a newly-created youth organization dedicated to educating Christian young people across the globe about the truths of Scripture and galvanizing them concerning their role in Earth's last days.

Ms. Wodesky has twenty-four years of professional experience as a national security manager in the government and private sectors. In 1998, she retired from the U.S. Air Force where she served as an intelligence and political military affairs officer. After her retirement from the military until 2002, she was a national security consultant for Booz Allen Hamilton, Inc.

Her assignments have included six years in foreign military sales and logistics program management of air interdiction aircraft and surveillance systems, and eighteen years as a national security policy manager, analyst, and strategic planner. She has worked at the tactical, operational, and strategic levels of the Federal government to include the White House; and lived or worked in the Middle East, Europe, and Central and South America.

She holds a Master of Arts in International Affairs from the Political Science Department of Dayton University, and a Bachelor of Arts in Humanities to include Spanish Language and Literature, English Grammar and Linguistics, and French Language from Biola University. Her degree from Biola also included an additional thirty semester hours in Biblical Studies. She is currently pursuing a Doctor of Naturopathy from the University of Natural Medicine.

Ms. Wodesky resides with her husband in Kingman, Arizona.