Unprovoked Family Violence In the West 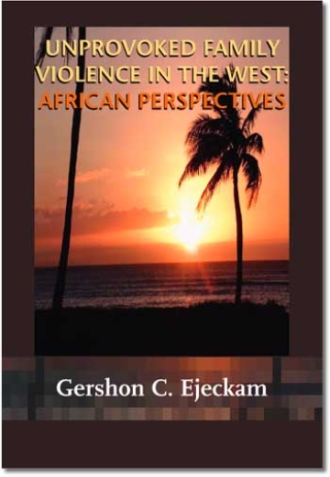 A comparison of life in African and Western communities. Highlights the unfortunate downturn in the West, where family values may be set aside in pursuit of material wealth. Failure to achieve often leads to frustration, disenfranchisement and murder. Relations kill each other to either get even or call attention to themselves.

Gershon C. Ejeckam is a medical doctor specialized in Anatomic Pathology. He was born in Nigeria where he received his elementary, high school and University Medical School training. He proceeded to Ottawa, Canada in 1974 to pursue his postgraduate residency training in Anatomic Pathology, obtaining specialist certification in 1977, from Royal College of Physicians and Surgeons of Canada and Diplomate of American Board of Pathologist. The following year he passed the membership exam of UK in Histopathology hence became a Member of the Royal college of Pathologist UK.

Dr. Ejeckam lived and worked in Nigeria, Qatar in the Middle east and is now residing and working in St John's Newfoundland, Canada.

Besides scientific and medical publications, Dr. Ejeckam has taken keen interest in education of the public. He established the Cancer Society of Nigeria in Enugu in 1978 and became its first Executive Vice-President. In 1986 to 1990 he became the President-General of his townÕs union, Isulo Development Union, an organization which functions as a fourth tier of Government in towns of most Igbo states of Nigeria. Dr Ejeckam is the author of two books, Essentials of Medico-legal Autopsy and Understanding Cancer in the Developing World.

His exposure to different tribes, cultures and religion has impacted on him the merits of some of the so-called backward cultures of the third and developing world. This book Unprovoked Family Violence in the West, African Perspectives, reflects his belief that culture and family are the bedrock on which orderly human society is organized and to ignore those in pursuit of affluence often leads to chaos, violence, including murder.