by W. Erwin Diewert and others 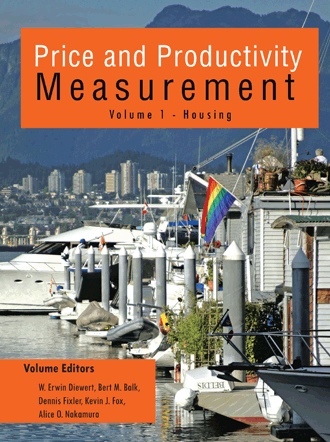 The winter of 2011 finds many nations still struggling with severe economic problems brought on by the burst of a bubble in residential housing prices. This situation incited urgent interest in whether the cost of owner occupied housing (OOH) services is being properly accounted for in the inflation statistics for nations. There would be interest in this topic anyway, of course, because shelter accounts for a large share of consumer expenditures. Moreover, there are important differences in how OOH services are accounted for in the official statistics of nations. The main approach in current use is rental equivalence. For example, in compiling the Consumer Price Index (CPI), the U.S. Bureau of Labor Statistics (BLS) uses rent data for rental units to form a rental equivalence measure for changes in the cost of OOH services. The rental equivalence approach is often stated to be justified because it can be derived from the fundamental equation of capital theory: the same theoretical framework that also gives rise to the user cost approach to accounting for OOH services in measures of inflation for nations. The user cost approach is one of three other approaches in current use besides rental equivalency. In chapter 2, W. Erwin Diewert of the University of British Columbia and Alice O. Nakamura of the University of Alberta provide an overview of the main types of approaches in use. The authors go on to develop a new opportunity cost approach, first introduced in a paper presented by Diewert in 2006 that is published as chapter 6 of this volume. We take up this aspect of the Diewert-Nakamura chapter in the concluding section of this introduction, since that material builds on the other papers included in this volume. This volume is more than the sum of its parts. The papers are sequenced so that a reader new to the topic area can pick up needed terminology in moving from one paper to the next. At the same time, the papers deal with some of the main unresolved issues of our time regarding the measurement of inflation for owner occupied housing. The authors of the papers in this volume include many of the key participants over the recent decades in the vast literature on this topic. In chapter 3, Arnold J. Katz of the U.S. Bureau of Economic Analysis (BEA) explains that within the European Union, the standard method for evaluating owner occupied dwelling services in the national accounts has been a stratification variant of the rental equivalence approach. Katz explains, however, that the unsubsidized rental markets are too thin in many of the Eastern European countries to permit the use of rental equivalency. His paper discusses an alternative method for evaluating dwelling services based on a simplified user cost measure. Katz notes that the standard user cost measure is derived under the principle that, in equilibrium, the purchase price of a durable good will equal the discounted present value of its expected net income (or benefits); i.e., it will equal the discounted present value of its expected future services less the discounted present value of its expected future operating costs. In chapter 4, Theodore M. Crone and Leonard I. Nakamura of the Federal Reserve Bank of Philadelphia and Richard P. Voith of Econsult argue that hedonic methods can be used to estimate the capitalization rate for owner occupied housing. The authors specify a model for the value for house i in time period t, itV, (1) , itittiteXVln+β=I,,1iK=, where is a K element row vector of house traits, and iXtβ is a vector of the estimated percentage contributions to the house value of the housing traits. The stream of OOH services that implicitly is equal to the rent, , is hypothesized to depend on the value of the dwelling and a capitalization rate, . If itRRtCittitVC=, then equation (1) can be rewritten as , or as itittiteX)Rln(+β=tC/ (2) ittittite)Cln(X)Rln(++β=, I,,1iK=. A corresponding hedonic regression for the rent for rental units is given by: (3) jtjttjtuX)Rln(+γ=, J,,1jK=. In this equation, unlike the case of owner occupied units, the capitalization rate does not appear because the price of the service flow is observed directly for rentals. The authors show that the capitalization rate affects the measured inflation index of owner occupied housing. They also argue that if owners and renters value housing traits similarly, then ttγ=β and the owner and renter hedonic equations, (2) and (3) respectively, will differ only by the constant, . In this case, they argue that the pooled owner and rental data can be used to estimate the capitalization rate as well as the housing characteristics prices. Making use of the capitalization rates and trait prices estimated using data from the bi-annual American Housing Survey (AHS), the authors calculate Fisher price indexes and inflation rates for both rented and owner occupied housing services. )Cln(t In chapter 5, Claudia Kurz and Johannes Hoffmann of the Deutsche Bundesbank explain that, while the importance of owner occupied housing in Germany is less than in most other industrialised countries, nevertheless a little over 40 percent of households live in their own homes. For the German CPI, the price component for owner occupied dwellings is imputed using a rental equivalence approach, much as in the United States. To assess the appropriateness of the official German imputation method for owner occupied housing service costs, Kurz and Hoffmann use data from the German Socio Economic Panel (GSOEP). The GSOEP reports major physical and locational characteristics of dwellings, rents actually paid by renters, and what owners say their dwellings could be rented for (i.e., the owner reported rent equivalents). Kurz and Hoffmann restrict their analysis to West Germany and the period of 1985 through 1997. 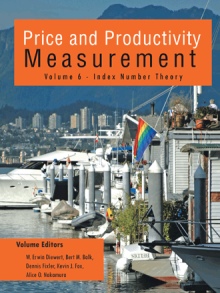 This is the first in a sequence of volumes about the official statistics measures of inflation and productivity for nations. The focus of this volume is on accounting for owner occupied housing in the inflation measures of nations: one of the least settled topics in official statistics. The volume provides an introduction to current practices and associated problems.

About the Editors W. Erwin Diewert is a professor of economics at the University of British Columbia in Canada, the long time Chair of the Statistics Canada Price Measurement Advisory Committee, and a major contributor to numerous international official statistics manuals (http://faculty.arts.ubc.ca/ediewert/hmpgdie.htm). He has won many Canadian and international awards including the 2005 Julius Shiskin Memorial Award for Economics and Statistics. He is also a Distinguished Fellow of both the American Economics Association and the Canadian Economics Association. Bert M. Balk is a professor of the Rotterdam School of Management, Erasmus University Rotterdam and Statistics Netherlands. Dennis J. Fixler is the Chief Statistician of the U.S. Bureau of Economic Analysis. Kevin J. Fox is a professor of economics and is Head of the Australian School of Business at the University of New South Wales and also Director of the Centre for Applied Economic Research (CAER). Alice O. Nakamura is a professor of the University of Alberta School of Business.