by Zane A. Bastian 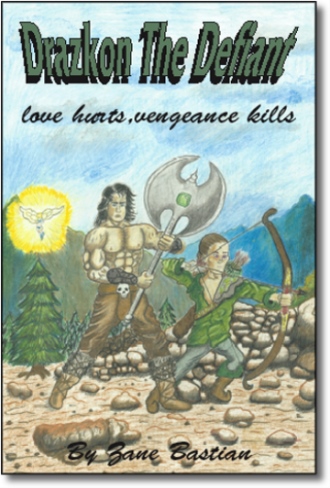 When an evil warlord and his army take young Drazkon's family from him, two strangers rescue the orphan and vow to raise him. Aspen, the fleet-footed elf, and Exteri, a tiny fairy with a big heart, are these strangers. Aspen, taking on the full responsibility of the child, raises him as a child of the forest; and as Drazkon grew, so did Exteris' fondness for him.

Being in such a sorrowful and hopeless situation, Exteri visits her mother, the eldest and wisest of the fairy kingdom, for advice. Exteris' mother tells her of a legend which sends her and her friends on a very long and dangerous quest, which upon completion would allow Exteri to take human form. With feelings of love mutual between the hulking barbarian and the tiny fairy, Drazkon and his friends set out on their grand adventure with high hopes of success.

Along the way friendships grow stronger, as many dark and evil foes step forward to oppose the companions. Many new friends are acquired along the way; which suits Drazkon just fine, for to him this quest has two main goals; love and vengeance. The physical love he wished to share with Exteri, and the vengeance he vowed to bring upon the evil warlord Maxitor, and his murderous hoard!

I was born in central Pennsylvania on May 29, 1972. Having always been interested in the world of fantasy writing, I started to put my thoughts down on paper with the hopes of creating something that others could enjoy as much as myself. Finally the images in my mind have indeed been put down on paper. Many more stories still roam around in my mind, and I hope to also put them into writing for others to read and enjoy. Other than a few small publications of my poetry, this is his first full novel that I have created. I hope for many to read it, and I hope even more that they enjoy the experience. Thank you.