The God of the West Versus the Christ of Glory

An Exciting and Liberating Journey of Faith

by Milton A. Reid 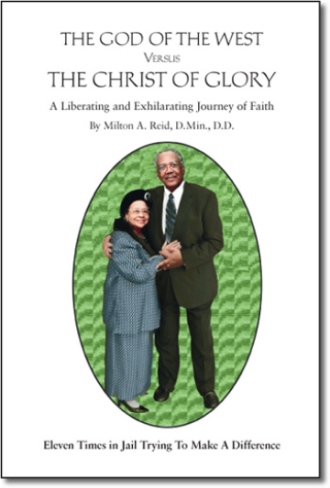 This book tells the story of a journey of faith, from a fundamentalist beginning through an otherworldly theology, to Liberation Theology. Many mainline churches have entered into the practice of serving a Man-made God of the West, rather than the God of the Ages and the Christ of Glory. It follows the author from an early bout with White Racism in both Church and State, and the history of the Church that waned from its witness of following Christ to the reality of an adjustment to the benign corruption of culture in its luke warm witness. It points out the way of redeeming Love through the Grace and Mercy of God. (111)

The journey of faith puts the author at odds with the world, as Aristotle, Socrates, Jesus of Nazareth, Thurgood Marshall, Dr. Martin Luther King Jr., Coretta Scott King, and others in the human rights, and the civil rights movement. It declares a war of love against the traditional Black church and other mainline churches engaged in theological reflections, rather than in theological practice. An underline theme throughout the book is seen in three sermons, and other chapters in the book that looks to the Family of the earth, becoming, the Family of God. It is seeking the support of our governments, and governments of the world through the United Nation in calling for a Global Family Day. (206)

The author relies heavily on his own growing pains in the traditional church and out of it, his 42 years on the national board of directors of the Southern Christian Leadership Conference, and 29 years with IFCO, the Interreligious Foundation for Community Organization/ Pastors for Peace, and his fourteen years as the publisher of the third oldest Black weekly in the United States, the Journal & Guide. A world traveler, he has preached on five of the seven continents of the world and is still pastor at-large and the Salem Baptist Church in Brewerville, Liberia, and Pastor Emeritus of Gideon's Missionary Fellowship in Norfolk, Virginia. (300)

He is married to Marian E. Todd of Windsor, North Carolina, a retired teacher with the Norfolk School Board, and the Father of two girls, Maravia and Michelle, of Norfolk and Richmond, respectively, and two sons, Milton Jr., of Norfolk, and Humphrey Thomas Reid, of Liberia, W. Africa.

Dr. Milton A. Reid, who prefers to be called, Milton the Disciple, is the son, grandson, and great grandson of Baptist Ministers, Pastors, and founder of churches. He was born in Chesapeake, Virginia on January 30th, 1930 during the height of the depression in America. The disciple discovered the real world as he walked to school in Norfolk County and white children road the bus. When a white boy spit him on one morning, he suddenly noticed that they were riding and he was walking. After raising the question with his father, he was simply told that God was going to fix it after awhile. When the first school bus was driven on that route some eight years later, the author drove it.

Upon completing High school, he volunteered to go into the United States Army, and would become a paratrooper with the Eighty Second Airborne Division, and was stationed at Fort North Carolina, where he met and Married Marian E. Todd of Windsor, North Carolina. He continued his education at Fayetteville State Teachers College and Virginia Union University, where he graduated with a B.A. Degree in History and a Masters of Divinity Degree in Theology in 1955-1958 respectively. In 1953, he was called to the New Hope Baptist Church of Chesapeake, and the Mount Olive Baptist Church of Virginia Beach in 1955. He was called to the First Baptist Church, Harrison Street in Petersburg in 1957, and to the New Calvary Baptist Church in 1966. While in Petersburg, he had his first jail experience for civil disobedience, jailed four times in Danville, Virginia, once in Lynchburg, Virginia, once in Albany, Georgia, once in Edenton, North Carolina, and twice in Norfolk, Virginia, demanding justice and equal opportunity. He served four years on the U.S. Civil Rights Commission, and forty-two years on the National Board of the Southern Christian Leadership Conference. He was a National Board member of Interreligious Foundation for Community Organization, and Pastor's for Peace for seven years.

An international traveler, he has preached on five of the seven continents of the world, Baptized three times in the River Jordan, and served Communion three times in the upper room in Jerusalem. In 1970 he took a trip around the world with his wife, Marian, and has traveled extensively in Africa, Asia, Europe, and the Soviet Union. In 1980 he completed all the requirements and graduated with honors from the School of Theology at Boston University with a Doctor of Ministry degree in Liberation Theology. Now a retired American Baptist pastor, he continues his ministry of Liberation and Celebration through new paper articles, The Martin Luther King Jr. Family Life Institute, and a Bible Study Group whose theme is "Doing the Word," from the stand point of Liberation Theology.

At 76, he has applied to Boston University for a Ph.D, in a course that he has called, A Divine Biology Of Being. The Disciple has been married to Mrs. Marian T. Reid, for 53 plus years, and is a father of four, Maravia A. Ebong, Michelle A. Reid, Humphrey T. Reid, and Milton A. Reid Jr.