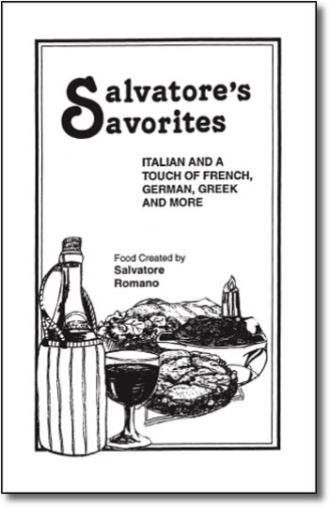 Italian and a touch of French, German, Greek and more!

Salvatore (coal miner, sailor, world traveler, electronic engineer, technical writer, restauranteur, food caterer, and chef-for-the-night) was born in Harrison County, Dola, West Virginia, amongst immigrant Italian families, other European immigrants, and West Virginia natives many of whom where coal miners. Unwritten recipes, several of which are included in this book, were shared among the immigrants. Most all other recipes are creations of Mamma Romano and of Salvatore who uses variations of other Italian recipes and discoveries in world travel. Some recipes are original creations.

After graduating from Lumberport High School and a career in Uncle Sam's Navy specializing in fire-control, Salvatore attended San Diego State majoring in physics and electronics. The navy training plus college led to a job as electronic engineer with a company servicing air-to-air guided missiles in Southern California.

Serious food preparation began when Salvatore opened a restaurant serving Italian food in California. The restaurant routine caused a change in job from electronic engineer to technical writer. Since Salvatore was chef and the former engineering job required travel, the job as a technical writer that did not require travel was undertaken in order to operate the restaurant.

The restaurant pursuit was too confining and was sold after two years, but the career as a technical writer continued until late 1979, terminated by early retirement from 3M. In the meantime, pursuit of culinary arts continued during the period before and after retirement by preparing food for banquets, parties, weddings, and chef-for-the-night.

After sharing many recipes with relatives, friends, and acquiantances scattered to the four winds, Salvatore decided to write and compile some recipes for favorite (savorite) and frequently requested foods prepared and savored for the past forty years.