Painting Islam as the New Enemy 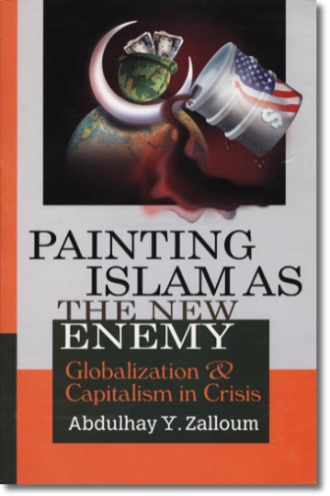 Find out for yourself! Islam is not the enemy;

Are you surprised to know that Islam's God is like yours? Islams's holy book the Qur'an, in verse (2:62) says: "Believers, Jews, Christians and Sabeans - whoever believes in God and the Last Day and does what is right - shall be rewarded by their Lord; they have nothing to fear or to regret." Islam preaches universalism, racial equality and social justice.

Wall Street and capitalism have elevated materialism and economic growth to the rank of a new religion of the land. Money became the ultimate measure of success. In Wall Street Capitalism, citizens are incidental numbers on balance sheets. Materialism became "a tumor in the soul".

ABDULHAY Y. ZALLOUM had the privledge to live, study and experience life in the two worlds of Islam and the West. His primary schooling was in Jerusalem when it was the capital of Palestine. His undergraduate and graduate studies in Engineering, Business and Advanced Management were done in Texas, Louisiana, California and Massachusetts.

In the United States, he was involved in the project management of the first all-hydrogen petroleum processing technology in the world. He dealt with most of America's multinational oil and engineering companies. He managed the operations of the first Middle East OPEC export refining facilities, and assisted in the organizational development of several Middle Easter OPEC national oil companies. His business assignments gave him extended periods of residence in Europe and some of the former United Soviet Socialist Republics.