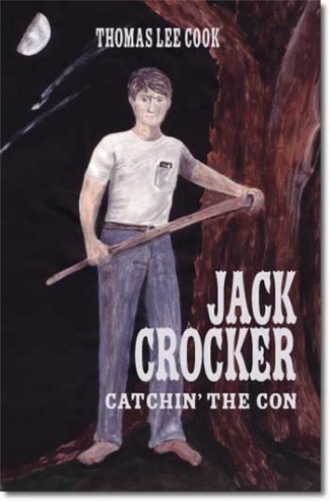 Jack Crocker-Catchin’ the Con is a story about four children on a summer adventure into the deep woods of rural America that takes place in the mid 1960’s. The four kids are in search of old dilapidated shacks, barns and farmhouses, riding a pony and an old mule into the hills on this their latest expedition.

Their paths cross unexpectedly with a dangerous escaped convict, Arnold “Buzz Saw” Mayhew. Once the kids realize the identity of the stranger sneaking around their camp in the middle of the night Jack and his buddies must figure out a way to escape, elude or capture the felon. They set a man-trap for the convict, which later backfires and turns their adventure into a struggle for survival. Jack and his three friends, Roxie, Wes and “Head” separate after setting the trap. The three head back to the community for help while Jack stays to keeps a wary eye on “Buzz Saw”.

After a couple of days with no clues as to the location of the escaped con, one man in the local community realizes that the convict has fooled them with his slick getaway. He realizes the kids are in immediate danger from the convict and his cronies. The man, Deputy “Wild Bill” McGill is now in a race to find the convict and felons before his and the community’s worst fears come true.

As the three kids go back for help they encounter two surveyors on a backwoods road. The men are only disguised as surveyors. They are part of the escaped con’s gang. Guns are pulled on the unsuspecting kids and they are captured by the ruthless felons.

As the man-hunt by the local police intensifies a couple of backwoods, local hillbillies witness the taking of the kids as prisoners. They are part of an old reclusive hill family that is notorious for their eccentricities and backward ways. They relate the kids’ entire predicament to their pa and ma and are sent back on a mission to secretly assist Jack in the pursuit of the felons.

The story will take you on a wild ride of twists and unexpected turns. It is fast paced and humorous with its cast of odd and eccentric characters. Jack Crocker Catchin’ the Con is the first in a series of books about these quirky and lovable characters’ adventures and exploits.

Tommy Lee Cook was raised in the rural South and as a kid had many of the adventures that are depicted in the Jack Crocker series. He was educated in Southwest Florida after his family moved to the area in the late 1960s. He attended the United States Coast Guard Academy in New London, CT and graduated from the University of Florida with a degree in English education. He resides in Buckingham, Florida.