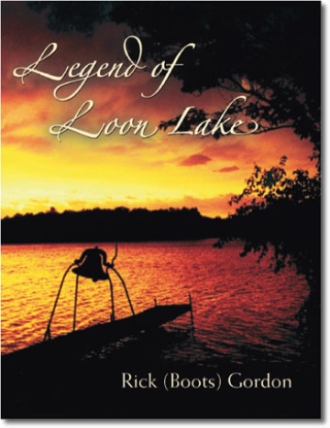 This book is meant for anglers and vacationers who frequent the north woods. it is about a very special resort in northern Wisconsin. Hayward, Wisconsin has a reputation for luring anglers from across the country. The area features many lakes with several producing world record fish. The potential for catching a large muskie is greater here than in most other areas. In particular, the Chippewa Flowage (Big Chip) has produced the world record muskie, and many others over fifty pounds. The other lakes surrounding the Chip also share this potential and have produced their share of trophies.

A very special resort on a particular lake is the focus of this novel. The author's interaction with the owners and clients are more than just casual, for they are tied together by a common bond: their abiding interest in the sport of fishing and the quest for a single muskie trophy.

Rick (Boots) Gordon is 70 years old, and has lived a full life. He was born in 1934 and raised in East St. Louis, Illinois. After disappointing results early on in school, he left in the ninth grade, thus terminating his formal education. He enlisted in the US Navy, where he found a new way of life built on discipline and schooling. Rick received his G.E.D. high school equivalency under Navy tutorage, and then went to college, where he spent many years and eventually obtained three degrees. He worked a variety of jobs during this time, and married the woman of his dreams, with whom he raised two beautiful children.

Rick began fishing seriously in the 1940's. At one time, he travelled five to 10 miles by bicycle to the nearby flooded strip mines. Later in life he was able to travel to prime fishing destinations in the United States. He has fished in nearly every state and in Canada and Mexico. Rick generally goes on 90 to 100 fishing trips a year. He keeps a log of his trips to jog his memory and to support data caught on still and video cameras.

Rick has been fortunate enough to have worked at jobs that allowed him enough freedom and flexibility to squeeze in fishing trips around the country, while maintaining a work schedule. These jobs also provided the him with funds necessary to pursure the sport of fishing, which he enjoys at almost any level.

When he retired in 1994, Rick gained even more freedom to travel and fish. Retirement has given him an independence he never knew, and allowed him to construct, trade, and buy lures, to research destinations, and ultimately, to fish more! He has also been able to concentrate on the arts which he is so fond of: painting, photography, and writing.