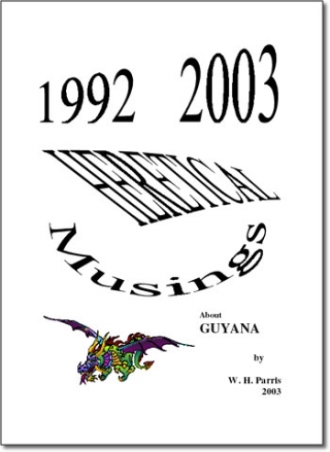 Heretical Musings is a set of time-bound essays whose merit lies not so much in the truths that they reveal as in the stimulus they provide to pursuit of the 'truth'. Inevitably, they rely on the provocation of conjecture for their appeal - that itching of the mind which should produce the mental analogue of a 'sweet scratch'. The temptation to use as the title for this book the Old French word 'Provocation' as been resisted - on the basis that a self-conscious switch into a foreign language is ont evidence of profundity; but those interested in the affairs of Guyana should enjoy this provocative mental walkabout.

The book comprises suites of essays written during the last ten or so years; and the Introductions that accompanied the publication of those essays that had been previously published are themselves treated as mini essays.

I sincerely hope that readers will be usefully titillated by the mental promenade.

For myself, on reflection I have been most fascinated by including the essays entitled "some of my Favourite Heresies" and have responded to this fascination by including the essay "A Critique of our Constitution" as the penultimate contribution in this publication. My fascination derives substantially from my experiences with the Constitution Reform Commission of 1999, and from review of the current states of Constitution Reform (March 2003). I suspect that a fair proportion of readers of this publication will be equally fascinated; and perhaps the Parliamentary Standing Committee for Constitution Reform will find the ideas at least interesting, and may be useful.

More important, however, is the hoary matter of ethnicity and voting behaviour in Guyana. I have long been convinced that voting behaviour is not a field characterized by conceptual elegance and analytical simplicity. The decision-making of humans, including innumerate politicians, in a milieu of non-benign competition, is imbued with a 'fuzziness' that precludes such characterization. That is why I instinctively reject simplistic assertions such as: "Voting behaviour in Guyana is ethnically pre-determined". Such a simplistic and ill-defined hypothesis has an insufficiency of both explanatory and predictive power; and in any event is untestable. Accordingly, it does not merit the place it holds in terms of popular explanations of voting behaviour in Guyana. These summarize the thoughts that have made me heretically swim against the tide of popular opinion, and have resulted in part in the suite of essays on Ethnicity. Those thoughts also colour a number of the other essays in this publications.

The author is a former Deputy Prime Minister, former Secretary to the Constitution Reform Commission (1999) and currently a Commissioner of the Guyana Elections Commission. He brings his formal training in mathematics and economics and statistics to bear on a range of issues related to governance and economic development in Guyana.