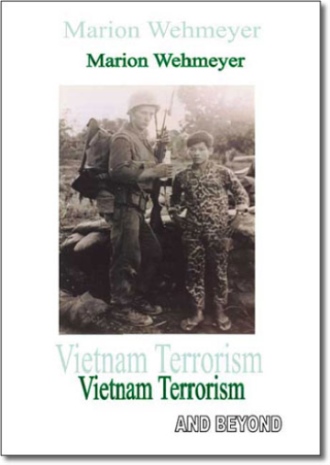 From the battle fields of Vietnam and the Cold War, to the streets of the Middle East, the author takes you through many battles against terrorism. Each battle is inspired by actual events, and described in detail by the emotions of the soldiers involved.

The events are supported by each character's point of view! From the USMC warriors, to the battle hardened enemy, we learn of their motivation and desire to continue their unfortunate struggle, in spite of the sociological and political conditions of the times.

Marion weaves the desires of the people involved in the "peace movement" into the families of all concerned, with the tragic events of the war dictating the outcome.

After Vietnam, and the end of the Cold War, the families seek to rebuild their lives, but find that a new and most terrifying era was just beginning.

Marion Wehmeyer is a USMC combat decorated veteran of the Vietnam War! During the tumultuous and chaotic period of the Cold War, Marion, and the men and women of his generation, often referred to as "Babyboomers," fought terrorism throughout the world.

Many of the battles against tyrannical regimes have reached epic status, while some lesser known battles should have. It is from his direct experience as a soldier conditioned by the battlefield, that he is able to portray the character's emotions with such realism.

Marion is married, and has two step-children with his wife of many years. His family's faith in Jesus Christ has made them secure as a loving family.

A graduate of the University of Houston with a Bachelor of Science degree, Marion draws inspiration from the historical records related to his time as a soldier. As a member of various veteran organizations, he continues to work with, and to learn of, other veteran's experiences.

Many veterans, as well as non veterans, have enjoyed his unabridged works of literature. For example, his book entitled Babyboom Doom, tells of a war veteran's story of trauma and PTSD. Additionally, his book Vietnam Terrorism follows the lives of soldiers through Vietnam and the terrorism of the Middle East.

Marion has also won many international awards for his dramatic underwater photos as a scuba diving photographer. His children's books are especially popular with parents. God's Sea Animals I and God's Sea Animals II are interactive guides to the Christian faith and to God's magic life forms.