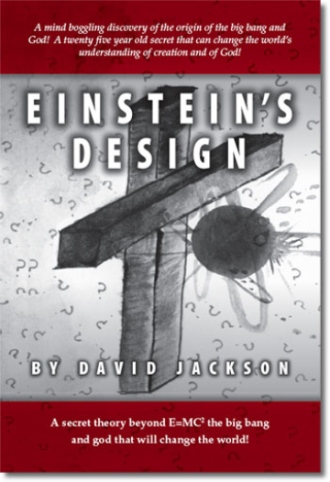 Einstein’s Design transports the reader via the world of physics, religion, psychology and romance on a journey of mystery, murder, intrigue and surprise that answers the eternal God question.

Too soon after the horrifying BTK fiasco of twenty five years in Wichita, Kansas, another and more terrifying threat faces the people in that city. Not one citizen of Wichita would have anticipated that the Ku Klux Klan, allied with the Evangelical Fundamentalist Christian Right, would bring violence and fear once again to their city.

A depraved partnership between the Klan and the radical fundamentalist Christian right is formed in an effort to condemn and destroy the secret cosmos theory developed by Albert Einstein and Bahartiya Bharti; a theory of pre-Big Bang existence and the truth about the idea of God!

The evil begins when Kamala Bharti, a young Physics Professor at Friends University in Wichita, Kansas and grand-daughter of Dr. Bahartiya Bharti, is brutally assaulted because of her outspoken position regarding certain Christian religious beliefs.

After leaving the court, Mr. Jackson became the CEO of the Fort Worth Boys Club where he was influential in the integration of girls into the program at the same time that the Boys and Girls Clubs of America merged nationally. He currently resides with his wife Sharon on their farm at Lawson, Missouri. To inquire about training opportunities or obtain copies of his books, Reality Therapy and Choice Theory: Managing Behavior Today, Developing Skills for Tomorrow and Violent Girls who Bully, contact David at jave@centurytel.net or (816) 580-4275.