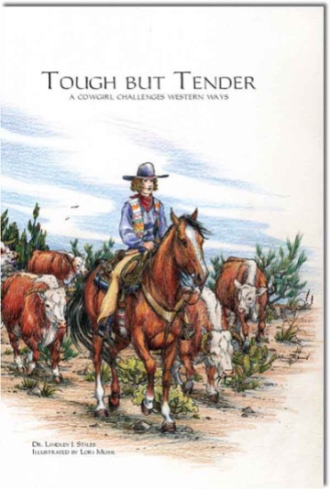 One reviewer wrote, "I couldn't put the book down. I kept thinking, 'You go Girl' as the heroine took on one challenge after another." "Tough But Tender is a great read for all women and girls interest rested in adventure and leadership" was the comment of another. They were talking about the story of a young girl whose father wanted her to be born a boy. He called her Frances and taught her to be tough like a boy. Every thing cowboys on his cattle ranch knew how to do she, under his tutelage, could do better. But her mother insisted that she be sent back East, to Radcliff College, to learn to be a lady as well as a cowgirl, to be tender as well as tough.

Four years later, as she stood in the graduating line she kept rehearsing her valedictorian remarks "Ladies our centuries of servitude are over. No longer will we choose only nursing and teaching as careers--worthy as those professions are. Nor will we be limited to being secretaries in the office and mothers in the home. We will walk abreast or ahead of men, not behind them. We will be the company Presidents of the future. Our husbands will work for us." As the story of Tough But Tender unfolds, she was challenged to make her prediction a reality in her own life.

Frances dealt with one challenge after another: her minister refusing to preside over her parents' funeral because she had committed what he said was a sin by having their bodies cremated, her catching the murderers, the attempted foreclosure by the bank by refusing to honor her father's loans because she was a woman, the refusal of the cowhands to work for a woman, and an attempt to rustle her cattle and burn down the ranch house, a cross burning by the Klu Klux Klan to protest her hiring Mexican cowboys. The panic in the cattle business; the depression in the community, and her love life with a Spanish boyfriend whom she had known as a child. It all makes a story that one reviewer said is a real "page turner".

Dr. Lindley Stiles, Hall of Fame Educator, Author, Poet, and Lecturer was born on a cattle ranch near where Tatum, New Mexico now stands. His World Class professional career was anchored in his boyhood experiences with real cowboys and Indians on his father's ranches--on the Caprock, near Grants and Pueblo Bonito, and on the West Gallegos--all in New Mexico. He graduated from the Farmington, NM Hight School which elected him as one of its first members of its academic Hall of Fame. Fort Lewis College named him as one of three Alumni of the Century. The University of Colorado awarded him three degrees--AB, MA, and ED. D--and gave him its coveted University Medal as well as its distinguished Alumni award. Also, he was awarded three honorary doctor's degrees from Rider College, McKendree College, and the College of William and Mary.

Dr. Stiles recorded his memories in "I Never Rode Alone, My Boyhood on a New Mexico Cattle Ranch". He co-authored "Half-A-Man with Simmie Plummer, who has designed all his Western books. "Eagle Song" and "Cody" are now being distributed by Trafford Publishing. "Cowboy in the Classroom" his professional autobiography was written to accompany the "Stiles Career Shelf" in the archives of the Deering Library of Northwestern University from which he is a Professor Emeritus. "Classroom Cowboy, Out to Pasture" is an addendum which deals with his on-going career activities. All contain various episodes of his early cattle ranching experiences which sparked his pioneering spirit as a professional educator and popular author.

His fame is world-wide for his creation of the social wisdom, "The Best Should Teach". For this proposal which has been called the best since Democracy was adopted by the Greeks 400 years before the Christian Era. The International Biographical Centre, in Cambridge, England made him its seventh pick out of fifty candidates world-wide to be named as one of the "Greatest Living Legends". The American Biographical Institute called him, "One of the Greatest Minds of the 21st Century".

His Western books have been called refreshingly reliable for their portrayal for the life of the cattle ranching world. Many readers have commented on their cleanliness, scholarly accuracy and 10+ quality of writing. "A Little Jewel that shouldn't be missed", one reviewer said of "Half A Man". "A true picture of the Navajo and the Indian Trader" was the comment about "Eagle Song" by one who spent his life with the two. "A great book" was the judgment of a reviewer of "Tough But Tender". "The readers of Western Lore are lucky that Dr. Stiles brought his creative genius to improve its literature" was another comment. His children's poetry, two examples of which are available from Trafford: "Christy, The Christmas Bird" and "Moods and Moments" have been called equal to or better than the best of A.A. Milne, the famous English children's poet.

Dr. Stiles says he elected to have his books published by Trafford Publishing after a well known commercial company offered to publish his first, "Half A Man"--in three or four years.

Lori Musil, is a native of Tucson, Arizona, who currently resides in Cerrillos, NM. She has spent 30 years in the diversified field of commercial art. Lori now paints and draws the West and its inhabitants, from cowboys to critters, from sun-dappled gardens to spirit filled landscapes. More recently she has branched off into the field of children’s books, having illustrated Dr. Stiles” legend Christy, The Christmas Bird. She works in a wide variety of mediums, oils, acrylics, watercolors, pastels, pencil, ink and a newfound love for clay and sculpture.

Her recent entries in New Mexico’s Trail of Painted ponies brought her great accolades for her top selling ponies, CowPony (2001) and HorseHide (2002). Her entry, Year of the Horse was the representative pony for the Trail of Painted Ponies 2003 project. Her cover picture on Dr. Stiles’ Cody is rated the best in all his novels.

Lori’s work has been collected and exhibited around the world, and her miniatures are a favorite in the international shows. Her work can be viewed on her website: www.lorimusil.com