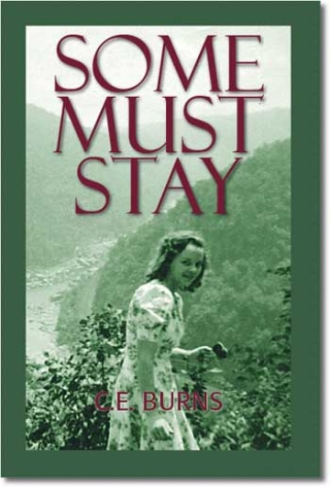 The Appalachias of the 1930's are as beautiful as they are remote, and the fierce people who live there are as hard and as untamable as the land they inhabit. Their society is a closed one, made strong, but uncompromising, by their geographic isolation and immutable poverty, and tempered only slightly by their fervent faith in God, their loyalty to family, and their abiding love of their land.

C.E. Burns' provocative novel chronicles the struggles of this poor mountain society, as it struggles to deal with the explosive issues of lust, greed, revenge, "unnatural passion", and illicit love.

Some Must Stay is the powerful story of Appalachian life and its hardships as seen through the eyes of two very different sisters: beautiful and willful Jenny, whose courageous love for a man of color pits her against her family's and communityÕs mores, and shy, handicapped Lindy, caught between her sister's unconventionality, and her community's intolerances. The violent repercussions that follow will forever change both their lives.

Eloquently told and elegantly written, C.E. Burns' style captures the nuances and flavor of mountain life and the culture of the Appalachian people of that era, and brings to life a sweeping tale of heart-breaking tragedy and poignant beauty.

Culminating in a tension-packed courtroom drama reminiscent of Harper Lee's To Kill A Mockingbird, this spell-binding tale of tragic love casts the reader into a complex web of opposites: between the ugly consequences of racial prejudice in an intransigent society, and the all-pervasive beauty that underscores everything in the lush, wild hills of Appalachia.

Charlotte Burns was valedictorian in high school. She entered college at 16, two weeks before her 17th birthday. She taught her first year of school at 18 and her father died when she was 19. She finished college at 21, taking a leave of absence from teaching from age 19 to 21. She graduated college on August 21, 1952. Charlotte also received a BA in Theology from Fuller Seminary in Pasadena, CA.

Charlotte and her husband have four children - two doctoral, one college masters and one technical degree. They have 12 grandchildren, most in college, all Christian and they have a great grandson on the way.