The Year I Followed the Sun 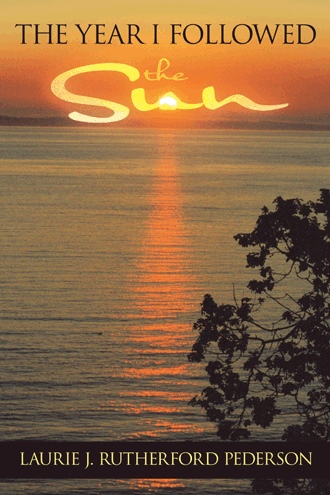 Then I saw the sign I had been seeking, ‘Tanah Lot,’ where a remarkable ocean temple, built on a huge rock offshore, lies set apart from the land by a stone basin. The rock has been ‘carved out’ by thousands of years of tides and waves. I remembered seeing a photograph of the temple in a National Geographic magazine as a child, and it was one of the reasons I had come to Bali. I had to hurry now as it was getting late in the afternoon, and the tide would soon come in and surround the temple like a castle moat. My watch indicated three-thirty, and I wanted to get back to Kuta before dark. When I was about ten kilometres away, I sped up, singing my heart out and waving to children along the way. Then suddenly, as I rounded a corner, a huge truck came lumbering towards me, taking up the entire road. I had no choice but to crank up my handlebars to avoid the massive steel machine, but I couldn’t get out of its way in time and went flying off the bike into the air! It’s true what they say. In a matter of seconds, one’s life can be changed forever. At this point, I could simply share with you that I crashed. End of story? No, in fact from this moment on, my life changed as the spirit of Bali interceded. As anyone who has ever had a near-death experience knows, everything slows down to a dreamlike state or a slow-motion film. First, I felt my hands slip from the handlebars. Then, I was floating gently through space. But amazingly, I felt a hand or something hold me and gently lay me upon the ground. I recall no pain, no sudden shock of contact, just a feeling of ‘being placed’ upon the coral road. Later my recollection of this event was that it was a unique experience I would never forget—one that I find hard to put into words. Some of you will shake your heads, others will simply understand. I tried to sit up, but my ears were ringing and I could hear nothing, not even the chatter of the villagers who had rushed out to see what had happened. A wall of people surrounded me, and the trees blurred into one mass of green. As I looked up at the sky, it was spinning. I then glanced down at my arm and leg, suddenly aware of the pain. The truck stopped immediately, and two men leaped out and came running, one to my aid, the other to the bike which was lying on its side, the engine still running and gas draining from the tank. His action was a relief as several curious onlookers were heedlessly smoking. What a blast that would have been! The concerned driver asked if I was all right. Needless to say, it was a challenging question. I could barely hear and there was the wall of strangers surrounding me, but thank goodness, the world had stopped spinning. I looked at my left wrist, where my watch had been, and saw a deep gash and blood pouring down my fingertips. My left shoulder took a large part of the impact and was a mess. But it was my right knee that had taken the brunt. It felt awful and looked even worse. Damn. What an idiot, LJ! I looked into the driver’s concerned face and asked if he had something with which to bind my wrist. He immediately removed his sweaty handkerchief from around his neck and gently wrapped it around my injured arm. Next came the true test: was I able to stand? God, let me stand. I got up with the driver’s help and stood for a moment, wondering if anything was broken; nothing was. I smiled a weak smile, for both the driver and I knew this was a good sign. “Doctor?” I asked, and pointed east. “Kuta. Kuta Beach.” He nodded and called to his friend to pick up the bike and put it on the back of his truck with the help of one of the villagers. He motioned me to get into the cab, but bending my knee was out of the question, I just couldn’t do it. Without hesitation, both men lifted me into the cab. I half smiled at the villagers as we departed; likely they’d seen their fair share of stupid, blonde tourists ‘bite the dust.’ It was a long way back to Kuta, but thank God, I was still alive and in one piece with nothing broken or missing. I was told the medical clinic was a kilometre away and was also warned that the doctor might not be there. I inquired if someone could drive me, and a hotel employee came back with—no kidding—a motorbike! You must be joking. ‘Hell, LJ, just get on it. You’re a mess.’ The doctor and his wife emerged from their modest home that ‘floated’ among the darkened fields of rice. “This way,” he instructed in clear English. I hobbled around to the back of his home with the dog barking loudly. ‘No, I wasn’t an evil spirit, just a scared, bleeding, and rather pitiful Canadian girl.’ We entered what seemed like a large tool shed but was, in fact, his operating room. He turned up the lamp, and his wife joined us. The O.R. table was made of bamboo poles, tied together, and covered with a sheet of clear plastic. “Here, up on the bench, please.” I forced myself up on the table and lay back slowly. Ouch—that hurt! He focused on my right knee. “Motorcycle?” he asked. I sheepishly nodded.

While many contemplate roaming the world, at 22, Laurie Rutherford Pederson embarked on a solo journey of 365 days, beginning in December 1976. She recorded her many adventures, sublime to horrific, in twenty-seven journals from which this book emerged. The Victoria, B.C. native worked as a travel agent, creating her own itinerary to countries that intrigued her. She explored these exotic locations, each replete with its historic and often perilous political landscapes, using all means of transport: from a luggage rack on a train in India to rickshaws to horseback, even a boat on the Canal du Midi. Family friends in several countries provided respites of gracious hospitality and rollicking entertainment; but, to her credit, Pederson writes with equal appreciation of the many strangers—locals and fellow travellers—she encountered along the way. Her prose sparkles with hilarious interior monologues and a cinematographer’s attention to detail. From a near-fatal motorcycle accident on Bali to a brush with death at the Israel-Lebanese border, there is adventure, romance, fear and reflection. The author left her secure home in Victoria as a young adventuress; she returned a woman. Pederson’s memoir is contemplative yet spontaneous, capturing a time of great change in the world.

Laurie Pederson lives in Victoria, B.C. with her husband Ned, often ‘commuting’ to their daughters’ homes in Napa and San Diego, CA. She’s currently working on a novel based on her grandfather’s experiences as an early twentieth-century Shanghai merchant. She and Ned continue to follow the sun around the world.