by Alan Allen, With Studs Terkel & Photographs by Richard Panse 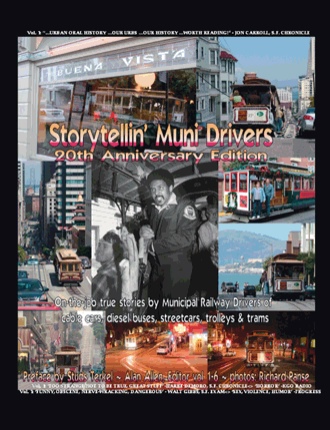 In San Francisco, the Muni drivers enjoy a mythic quality. One of the few blue collar jobs left in a city that was once dominated by working class prople, Muni drivers are the heartthrob of their riders and the scapegoat of the press and upper management.

The Muni driver is blamed if the vehicles run late; but the management determines their schedules, not the drivers. Victims of their own union, the driveres and their friends know their union is only a paper tiger that can not be trusted.

At the same time, each Muni driver is awash in a sea of what is commonly referred to, as, the public.

The public may be drunk, happy, sad, armed and dangerous, stoned, flirtatious, helpful, threatening, wild or sedate for any reason at any time with or without provocation. Some drivers illegally carry guns to protect themselves from thugs. Other drivers are given cookies, casual glances and flirtatious smiles. Accidents occur.

Drivers are followed and tailed by supervisors eager to complete the transition from driver, to supervisor, to union management then to city management of the Municipal Railway -- which is accomplished by getting as many drivers in trouble as possible.

All this drama and melodrama is as routine as getting stuck in traffic, it's all part of the job for San Francisco's Storytellin' Muni Drivers.