Drawing On All 4 Brains and All 8 Intelligences

Drawing On the Mind 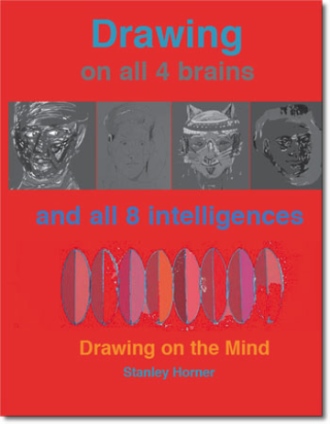 Drawing On All 4 Brains and All 8 Intelligences: Drawing on the Mind has 110 pages, with countless quotations form artists and writers-on-art, 42 suggested as Experiences designed to awaken participants to many of the basic issues in drawing, a chapter on the new pedagogical process that informs the book, over 130 charts, diagrams and images, a revision of the literature on brain/Mind intelligences as it affects artists researcher, teachers, and critics, and a chapter outlining the basics of visual image design.

Drawing on the Mind proposes a new structural relationship between the functions of the brain and art-event making. According to this new (Shlain/Horner) typology, drawing and painting are not merely right brain practices as is often implied; rather, in their various forms, they carry the creative potential to evoke all four brains and all eight re-defined intelligences in an integrated process; drawing engages the Mind.

A relatively new structural paradigm/syntagm construct, the Analogos, makes it possible to articulate a typology of the relationships between the layers of brain activity, the layers of art - event making, and the layers of human intelligences.

A brief outline of the relatively new iiae (interactive interdisciplinary art education/interactive interdisciplinary art events) paradigm/syntagm and its relationship to DBAE (Discipline Based Art Education) are included for those interested in understanding the larger pedagogical context of the Response process that informs the orientation of the Experiences presented on pages 43 to 90. A more detailed theoretical elaboration of the meta-modernist/iiae paradigm/syntagm is available in Horner, Volumes 2 and 4 (Bibliography, p. 102)

The iiae paradigm/syntagm introduces the Response process as theorized and practiced over a number of years by the author/artist and as central to the potential of the new meta-modernist paradigm and its interaction with the tradition explored by Modernist artists. Whereas DRAF (Discipline Based Art Education) endorses the Modernist preoccupation with discrete domains of knowledge and a top-down strategy that focuses more on the "subject matter" than on the "subject agent," iiae is grounded in inner-image/outer-image fluency by individual "subjects" engaged, as "activators," in a community of voices. As such, iiae is presented as a supportive ground for DBAE; iiae aims to integrate the two major streams that have been integral to the history of Art Education in North America: the self-expression creativity movement that emerged in the early part of the twentieth-century and the discipline-based movement (DBAE) which emerged later in the century.

While semiotics and DBAE generally ignore the "subject," iiae foregrounds it as basic to all inter-active/intra-active dialogue, not in isolation form the outer object (artwork), but inclusive of the interactions between speaking subjects, spoken subjects, subjects spoken and meta-subjects spoken (i.e. between the one and the other, what they speak, and what they speak about what is spoken, respectively). While structuralism generally ignores diachronic (temporal) process, iiae foregrounds it, and integrates it into the ever-present problematic of synchronic space, the domain of timeless stasis.

A new structural paradigm/syntagm of the layers of the intelligences (Shlain/Horner) makes it possible to revisit and revise the ground work by Howard Gardner in relation to layers of the brain and the layers of art-event making. By refocusing the heart of art on to the Response practices of each individual"s inner-imagining Experience (on all 4 brains) Drawing on the Brain springs forth as Drawing on the Mind.

Forty-two suggested iiae art-event Experiences are outlined so that basic introductory issues of drawing are touched upon, not in the conventional mode, but rather in its new formation as an inner-imaging/outer-imaging Response practice. These sample drawing Experiences are not just directed at the making of realistic images; rather, they also touch on the larger fundamental issues intrinsic to the potential use of visual image language and visual image techics. These are presented pedagogically as self-teaching Experiences in which inner imaging practices are just as important as outer imaging practices, and where feedback from others is just as important as self-initiating feedback: we can know our own voice more profoundly when it resonates among the differences and similarities that is constituted by a community of other voices. (There is, then, value in forming a group and working on all sorts of Experiences together with others.)

Sample drawings by the author-artist (pages 43-89) are included to facilitate the understanding of the written instructions, to offer images to trigger and facilitate the reading process, and to indicate that the Experiences are not just theoretically devised, but rather, worked through. These are not presented as exemplary but rather as minimal sketches to suggest possibilities. Readers should endeavor to leap beyond these and aim for a multitude of engaging experiences filled with exploration and insight into life's personal intrinsic content and the means by which it is revealed through visual image technics and visual image language.

A Bibliography (page 102) is included so that viewers/artists/students/teachers/researchers/readers/critics can find samples of drawings and paintings to inspire the study of visual image technics and visual image language as a means of gaining insight into the practice of reading and making meaning. Included are the listings of other books by the author/artist for those who wish to delve deeper into the Analogos/iiae Response approach.

The Analogical paradigm/syntagm, the underlying structure of this text (pages 20-23), is designed to play an interactive role in relation to its counterpart, cause-effect logic.

The author has taught a wide range of subjects for ten years in elementary and high schools, and a wide range of media subjects and technologies in art and art education students for 30 years at all levels of the university. He works in both traditional and digital media in both sound and image production, and has published 4 books on the arts and arts education. He is the designer of the ORG (Open Response Gallery) project for internet and mail response interaction. He is semi-retired from full time teaching but continues with a full engagement in studio production.