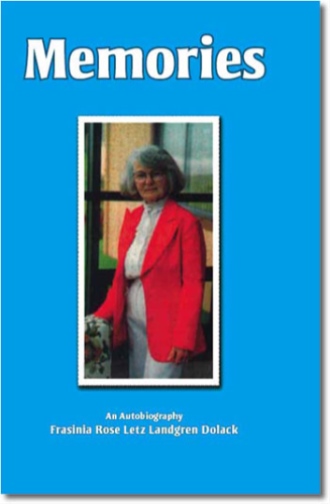 Frasinia Rose Letz Landgren Dolack shares true life experiences which began with her birth April 20, 1910 in the resort community of Crimea, near the Black Sea in Russia. She is the twelfth child born to the family of 15 children and four older adopted; only the last two children were born in the United States in the state of Montana.

This Russian family of nobility, robbed at sea on the trip to America in 1913, were reduced to immigrant farmers on 160 acres of Government granted land through The Homestead Act.

Frasinia Rose's youngest sibling grew up to become legendary Hollywood leading man —actor George Montgomery— in film and television. Frasinia Rose describes chores which she and her siblings carried out at an early age on the family farm. More chores and jobs were added as skills, physical strength and mental acuity developed. Learning and performing, according to age and skill appropriateness, taught the children family and community values of responsibility, dependability, integrity, and compassion, all of which strengthened their resolve during hard times brought about by The Great Depression.

Frasinia Rose takes the reader through experiences of youth at school, traveling alone for the first time by train, travails of first love, and as an adult participant in courtship, marriage, child-rearing, loss, and spirituality. Natural-healing with plants, a carryover from Russia, and strong beliefs in the power of prayer in daily living are paramount throughout this memoir.

Frasinia Rose Letz Landgren Dolack was born April 20, 1910 to Duna or Dena (Yavdekia Mousyevna) and Gregory (Hrehori Sandovich Letsoef) Letz in the resort community of Crimea, near the Black Sea in Russia. She is the twelfth child born into the family of 15 children and four older adopted. She came with the family to the United States in 1913.

This family of Russian nobility, robbed on the ship coming to America, were reduced to immigrant farmers in the state of Montana on 160 acres of Government granted land through The Homestead Act. Frasinia attended a one-room country school where she learned to speak English. At home she and her sister Raya Lyda were assigned household tasks at a young age. Those experiences and responsibilities made her task efficient in later life. She developed compassion and understanding for those less fortunate and she became the role model to multi-generations of family.

At 96 years of age, she maintains a strong sense of self and self worth. She is an accomplished painter in oil and watercolor. Her youngest brother became legendary Hollywood leading man —actor George Montgomery— in film and television. She has four children, twenty-one great-grandchildren and numerous nephews and nieces.

In publishing her memoir, Frasinia Rose hopes to inspire those who need motivation; to instill understanding in those who embody hatred; to advocate perseverance to those who have a dream; to encourage those who are discouraged; and to uplift those who lack faith.