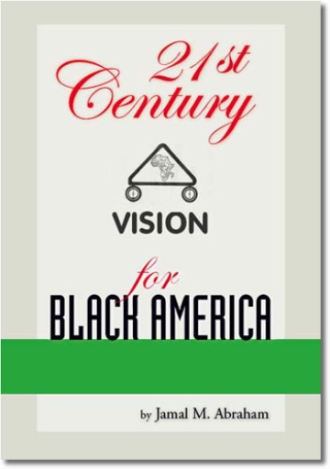 America's no deal for reparations, erosion of an affirmative action, growth in Hispanic and Asian immigrants and shift to national terrorism concerns have left the interest of African Americans out on the far limb in the 21st century. Merely reactionary to racial hatred and prejudices, black organizations have shifted their awareness campaigns to one of AIDS/HIV, leaving the sting for a national black agenda all but diminished. Out-of-touch and aging civil rights leaders are ineffective to the cry for social and economic reform for the deprived black American culture. Seemingly scared and clueless, a shifting of the guards is due.

While the black academia have integrated into the suburbs, urban blacks are left with religion for hope and restraint of anger that has opened the gate to a HIP HOP culture inducing ignorance, illicit sex and vulgarity. As religion continues with its "wait to die" or wait for God" philosophy, black culture in America is left to chance, toss of the dice and entertainers for tranquility. It is the African Americans interested in the "here and now" as well as the future of their children that have generated reason for this book.

This book, 21st Century Vision for Black America, provides a realistic positive next step to the sojourn of black Americans. It traces blacks from their heroic ancestral days when education was marveled and thriving societies occurred until a substitution of education for cults, magic, voodoo and sorcery that allowed European conquerors to enrich selfish African leaders while enslaving their people. Unlike other books which bores the reader with horrors of the slave trade, this book explores European philosophy and the role Hollywood and sports played in the shaping of black slaves, creating stereotypes inferior in nature and pampering the worship of white skin.

The industrial revolution is portrayed as a wake up call that indeed blacks were capable of reason and excelling in science and technology. As the book qualifies how science and know how extinguished a culture vacuum in ability, it accentuates the education movement with the birth of black colleges and Black nationalism in the 1990s to the growth of black pride and the love of African ancestry. Using pictures and illustrations, the reader is provided with a concise solution for African Americans at this particular time in history. The vision ensures black Americans will emerge in the 21st century with dignity and prominence which happens to be coincident with the crisis facing Africa, a continent almost at the level of fourth world status. It compares Japanese rise to power through nationalism and divine providence as a model for a project to assemble a massive number of black Americans and bring higher education, manufacturing and improved infrastructure to Africa.

A practicing engineer, Jamal Abraham was born in a rural suburb of Detroit, Michigan called Clinton Township. After attending Clintondale High School, he later graduated from Michigan State University in June of 1974 with a BS degree in electrical engineering. Further schooling followed attending Arizona State University in pursuit of a MS degree in Electrical Engineering.

In 1986, Jamal traveled to Egypt which became a pivotal point in his professional career. Spending several months visiting sights in Egypt and Sudan, he returned with a vision and model for improving the condition of minorities and the poor. Instead of continuing along the path of social misfits requiring hand-outs and hand-downs, minorities and in particular African Americans could engage in practical science based economic development to achieve international prominence.

He founded a non-profit educational charity, African on Wheels, four years ago with a mission to provide vocational skills to urban communities initially in Cleveland. The organization conducts fundraisers, seminars, walk-a-thons and science fairs to raise awareness for the need of science based education. Now, with an executive board, sub-committees, and sponsors, AOW plans to open its first vocational level trade school in the Akron-Cleveland area in the year 2008. Jamal has made countless presentations and speeches addressing the re-emphasis for technical skills.

Abraham has over thirty (30) years of solid electrical engineering experience in the capacity of automation design, process controls engineering and power distribution. His writing skills come from the many engineering proposals written to clients, many 200-300 pages of technical text and engineering drawings. General Electric sent him to the technical sales and writing class while employed by them. Jamal has worked at a number of Fortune 500 companies including Ford Motor Company in Lima, OH, general Electric in Overland Park, IBM in Kansas City, Delphi in Sandusky, Ohio. American Axle & Manufacturing in Detroit, Michigan, Control Data Corporation in St. Louis and Sperry Flight System (UNISYS) in Phoenix, Arizona.