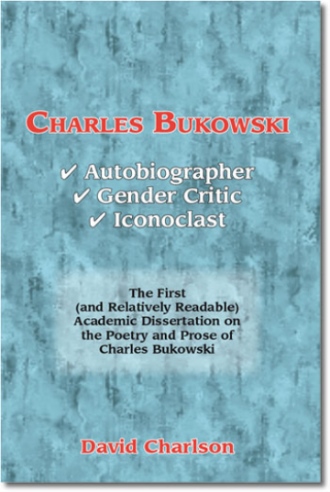 Charles Bukowski disliked academics, as this academic and readable book points out from page one onward of its introduction, "Charles Bukowski vs. American Ways." Begun before Bukowski died in 1994, Charles Bukowski: Autobiographer, Gender Critic, Iconoclast was the first doctoral dissertation on his prose and poetry up to that date, and it is offered now for fans and academics alike-no more need for black-market sales.

Chapter Three, "Problems of Masculinity: At 'Home,' at Work, at Play," tackles the knee-jerk assessment of Bukowski as just a sexist "Dirty Old Man." Michael Kaufman's "triad of men's violence" (against women, other men, and themselves) explains the general Bukowski persona as a complicated gender construct. Bukowski's Bildungsroman, Ham on Rye, shows Chinaski as victim, practitioner, and critic of male violence, with the last role figuring into his other work too.

Chapter Four, "Bukowski vs. 'Institution Art,'" classifies this challenging author as both populist and avant-garde. As general postmodern phenomenon, he blends the democratic accessibility of populist writing with the adventurous gesturing of the avant-garde, and the result is direct, daring, truthful, and funny.

The book's conclusion, "Summing Up: Giving Bukowski His Due," predicts that Bukowski will be read far into the 21st century. Buy his books before you buy this one.

David Charlson teaches English at Oklahoma City Community College. He earned his Ph.D. at the University of Kansas in 1995, choosing to write his dissertation on Charles Bukowski when little work had been done on him so far. Hearing rumors that the dissertation on this internationally famous author was fetching quite a price on the Bukowski black market, he decided to offer it through legitimate means.