The Journey Home: Part One

by by Norma Budden and Michael T. Ingram 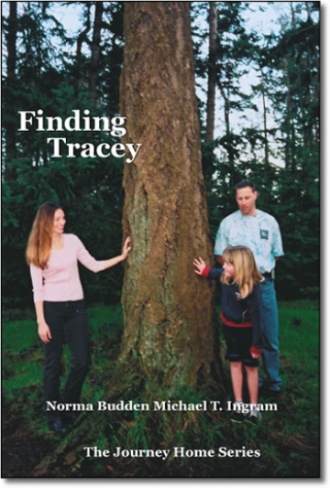 Finding Tracey – a love story… complete with comedy and heartache… characters so real you may see them in your mirror.

Jewel and Collin live in different countries, and hold different jobs, but have the same powerful convictions. Though they haven't met in person, e-mails go back and forth every day, drawing them closer as one month rolls into the next. Finally, they put a plan in motion to meet face-to-face.

Enter Tracey, one of Jewel's students, who has been abused and neglected – a girl who graces Jewel's doorstep before Collin makes it out of his country to see her – a girl who develops an agenda of her own.

Will plans be put on hold? Will Collin and Jewel be willing to share their time and attention with a troubled ten-year-old, or will they realize they don't have what it takes – that the connection they shared wasn't as strong as they supposed?

Norma Budden lives in Canada while Michael T. Ingram, Sr. lives in the United States. They first made contact through their web sites in August, 2004, and have become the best of friends. Says Norma, "It's truly amazing! It's hard to believe there's someone in the world who thinks so much like I do. I've adopted Michael as an older brother. I'm sure he's always been a part of my life."

Michael agrees. "I lived my whole life without a sister until Norma came along. Now, I wouldn't know what to do without her. It's fun to pester her… but we also talk about God, and other important things. My wife, Patsy, and Norma have become great friends."

Essentially, Norma has discovered another love… writing with a partner. That's right! She and Michael teamed up to write a book together, Finding Tracey. This was her first venture working with a co-author but it was definitely a successful, entertaining experience.

"Excitement built during each chapter, especially since I didn't know what Mike would surprise me with," says Norma. "We hadn't met in person but decided to write a book together over the Internet, and it's only the beginning for Michael and me. Though we've both been busy with various responsibilities in our lives, we don't plan to stop writing. Between us, there are numerous ideas just waiting to be woven into a story. We just need to find the time," says Norma.