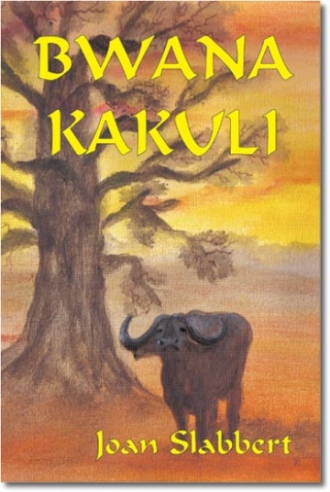 Bwana Kakuli is the true story of a spoiled young woman who meets the man of her dreams and follows him to wildest Africa. Spanning over 70 years, it is a story of adventure, passion, humour, courage and of a deep love, for both her man and the wilds. Told in her own words, this book relates how difficult it must have been to adapt to this new life and to become subservient to a man like Kakuli. The humorous escapades with strange creatures, as well as the encounters with some of Africa's most dangerous animals, make this book well worth reading.

To be honest, Joan Slabbert is somewhat of an enigma. Those who know her today, see her as a real lady; well-groomed and gracious. Yet if you were to ask her family, we would describe her as one tough woman, who is able to cope with any situation. There is far more to this woman than initially meets the eye.

For many years we begged our father to write a book about his African adventures, but he dodged the task and ultimately, it was too late. It was his death that sparked a need in our mother to put pen to paper and honour his memory. At 77 she began to write her story and two years later, felt it was ready to be published. It was a story that needed to be told. Anyone who lived in Northern Rhodesia during those years will thrill at the fine description of so many familiar places and probably recall a number of the people mentioned in her book.

As her children, we marvel at the vast expanse of her memory and it is with deep respect and pride that we look on as her book is published. She has many creative talents and has won numerous awards for various crafts. She has the innate ability to cope with emergencies, calming those in panic and taking control of precarious situations. Yet, through all this, she is able to maintain a special sense of grace and poise.

Although she describes our dad as Kakuli, we know that much of his greatness came from the support and love of our mother and we celebrate having spent our lives with her. Those who know her personally, instinctively know that their lives have been enriched. Joan Slabbert has lived a life full of special memories and adventures and has related them with all the enthusiasm that she shows to everyone around her.