"Why do I have to learn this stuff?" Misinformation and the American High-School Literature Textbook 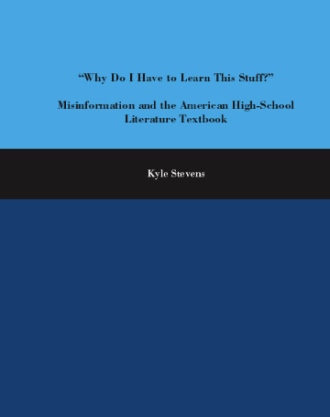 One of the most common questions asked by high-school students is: 'Why do I have to learn this stuff?' High-school English textbooks answer this question, with regard to what is taught in English class anyway, and the answer is what students have always suspected: There is no good reason to know much of what they are being taught. English textbooks are full of such egregious errors that their publication demonstrates that one needs no more than a superficial knowledge of their subject matter to edit or write for them. If those who are responsible for introducing students to literary studies do not need to know the subject, indifferent adolescents have a right to wonder why they should bother to do their schoolwork. Indeed, if teachers are passing on the information that is being provided by textbook companies, students may be better off ignoring their reading assignments.

The examination of the lives of Desiderius Erasmus and Thomas More is particularly revealing of the kind of ignorance that a book publisher will accept from its employees. After briefly reviewing his life and interests, the text notes that Erasmus was friends with More and points out that the two friends "had much in common" (199). This is true enough, but having stumbled upon the fact that Erasmus and More had much in common, the text proceeds to explain what they had in common, and error, egregious as well as obvious, raises its ugly head. To determine the commonalities between these two thinkers, the person working on the text must have decided that what was true of Erasmus must also have been true of More. Both thinkers, the person thus concludes, must have been "dedicated churchmen" (199). Erasmus was a churchman: He was a monk. More, by contrast, was a lawyer who became Lord Chancellor of England, something mentioned in the text. He was, in other words, a layman, not a churchman, despite his refusing to acknowledge that Henry VIII was Supreme Head of the Church of England and losing his head for his intransigence.

A churchman, as Catholics understand the term, is one who has taken religious vows and become a member of the clergy, as More considered doing before he settled into his career as a lawyer. The word churchman, it is true, began to mean a member of a Church in the late seventeenth century, but when it is used in this sense, the word is only applied to the members of Anglican state churches throughout the world, that is, The Church of England, The Church of Ireland, and so on (OED). Neither Erasmus nor More were churchman in this sense, both being Catholics, and anyone in possession of a decent dictionary could have found that out.