A Life on the Ocean Wave and on Shore 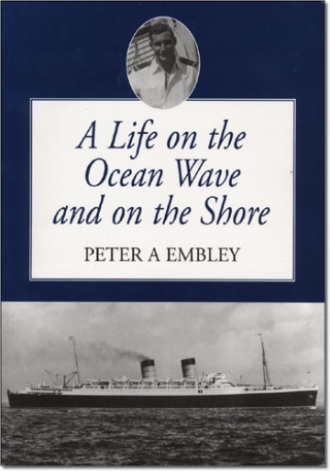 First time author Peter Embley is a man who has fought his way back from the brink. Four years ago he was involved in an horrific car accident which left him with severe head injuries, and killed his wife. Experts told him that he would probably not walk again, but Peter decided very early on that he definitely would. His positive outlook and determination to succeed drove him to push himself, and he confounded the experts by not only walking again, but also gardening, playing golf and driving.

Peter was inspired to write his memoirs by book written by a fellow sufferer. His father was a captain in the Merchant Navy who, in 1945, was killed when his boat hit a mine. As the orphan of a merchant seaman Peter was sent away from his mother at the age of only 11 to the Royal Merchant School in Berkshire. The shock was great but the young boy adjusted and the foundations were laid for Peter's own career in the merchant navy.

He chose The Ellerman Line, which sailed out of Liverpool to some of the world's most exotic and fascinating places, and the author manages to convey to the reader the colours, smells and cultures of these locations, as well as giving a glimpse of life on board a ship. While he enjoyed the glamour of nautical life he found the prolonged separations from his pregnant wife, Pat, extremely difficult to cope with and he eventually decided to pursue a different career. The computer revolution was just beginning and Peter got in on the ground floor, becoming a systems analyst with, among others, Otis lifts.

In 1998 Peter and his wife Pat celebrated their ruby wedding anniversary and were looking forward to a long and happy retirement together when the car crash shattered their lives. Life for Peter Embley has certainly not been easy over the last few years but things are so much better than they might have been. His recovery continues and now he has Margaret at his side, whom he married in October 2001 and with whom he is very happy. He hopes his book will inspire others who are recovering from brain injury.

Peter Embley was born in Gateshead, Northunberland in 1935. He followed in his father's footsteps by joining the Merchan Navy in 1951. His father wa a captain in the Merchant Navy and awarded the OBE. Peter spent much of his career travelling around the world as an officer on cargo and passanger lines. During his voyages, he experienced many cultures and witnessed many amazing sights.

After ten years in the Merchant Navy, Peter left to pursue an entirely different career as a computer systems analyst. Peter overcame any challenges that he faced in his new job and continued to work until retirement.

Peter was inspired to write his first book, his memoirs "A Life on the Ocean Wave and on the Shore" whilst recovering from a severe car accident. In the accident his wife Patricia dies. He has recovered and remarried to Mararet, his new Wife. He is now fully fit. He has moved from Maghull to Ormshirk, in Lancashire, where he lives with Margaret.

This is Peter's first novel of fiction.

Collision Course is a romantic story, with many seaboard incidents.