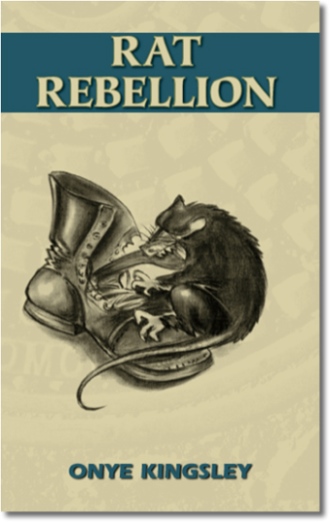 Rat Rebellion is a compelling satirical novel, intelligently and graphically written, with symbols and anecdotes depicting the economic and socio-political state of affairs that prevail in some African and other Third World countries, represented by the fictional City of Canterborne.

This thought-provoking novel graphically exposes an presents the degree and magnitude of the general maltreatment, poverty, deprivation, gross level of abuse and loss of life faced by the oppressed, and how they have been abandoned by those whom they voted into power.

The city of Canterborne houses two classes of people: humans are the privileged class- the upper and ruling class with their numerous cronies and family members; rats are the poor, deprived down trodden citizens of Africa.

The title, Rat Rebellion, metaphorically means 'the rebellion of the oppressed people', so one could call it the 'people's rebellion'.

One wonders about the end result. What could happen eventually if things get out of hand? At the end of the day people say true power lies with the electorate, but could this be true in the case of Rat Rebellion?

Kingsley N. Onye is a talented published poet, novelist and successful writer. He is the author of the best-seller "Animal Kingdom Poems" and other titles.

He is a Nigerian and now a proud British citizen. He loves both countries dearly and draws valuable inspiration from them in his writings.

The author is a great traveler and nature-lover. He currently resides in the United Kingdom with his family.