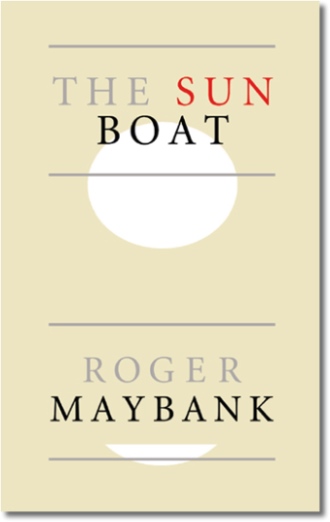 A 'fairy tale' in mode and manner, THE SUN BOAT begins with the birth of a baby boy within a stone circle on a hilltop. His mother nourishes him and tells him his destiny, which is to find his father; and dies when he is five, leaving him with only a coracle and a paddle on the shore of a high, sun-struck lake. He paddles over the lake, in search of some way 'down' from it, to the world where his mother has said his father lives. Guided by strangers, he finds his way, but not his father, a young man in whose experience the tale continues. Lost in a forest of great trees, he comes to and climbs over a high wall, and finds himself in an immense and orderly rose garden, at centre of which a thin wizard is waiting for him, and leads him into a town in desolation from the depredations of a dark opponent in a castle at the horizon of the surrounding plain. The people are bleeding to death, and the princess is more animal than woman. To help overcome the opponent, he leaves the town, finds himself in strange lands of ever-flowering trees, of waterlogged earth and rain unending, of hard and dry desert, where he forgets why he has come there, and the women he holds in his arms die and slither to the ground. He finds himself again in the rose garden, and back in the town. The princess is beautiful, they make love. He flies with the wizard on a gigantic raven across the plain to the opponent's castle, where he finds that the 'opponent' is the boy, his own son.

Born in Winnipeg and lived there for twenty years. Not often since. After universtiy in Britain and some European wandering, he lived in Greece for some years, on an island, writing. Returned to Canada, to live on the west coast, where he began to write plays, and stage them. THE SUN BOAT is his first novel.