A New Scientific Theory of Creation 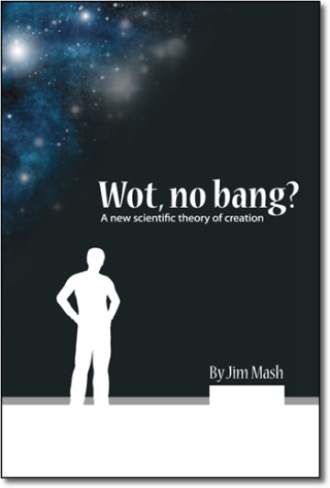 A new theory is presented based upon energy being a real substance existing in fluid and solid forms. The density of the fluid form varies from a minimum of the continuum (aether) to a maximum of the solid form as matter. Energy is continuous and not particulate meaning that any motion once started becomes a two dimensional whirlpool. These whirlpools create the nuclear particles of atoms, compress matter into stars, and organise stars into galaxies.

The theory explains why galaxies are disc-shaped and why the motions of the stars are not controlled by gravity but by the centripetal force of a whirlpool. Dark matter, dark energy, and many other mysteries are easily explained and cosmic radiation shown to be a local phenomenon.

The theory shows how particles are formed with the correct energy density, size and a spin rate that throws off photons at light speed. It shows that photons lose energy at the same rate and by the same mechanism that creates particles. Thus the redshift of starlight is not due to expansion but to natural processes. Hence the universe is not expanding but is now in a steady state.

Electricity, magnetism and gravity are all a result of energy flowing and are therefore forces of contact. The flow of gravitational energy is 1039 times less than that of electricity, which accounts for their greatly different strengths. Gravitational heating is shown to be the real cause of planetary temperature cycles, hence global warming is not manmade. www.wotnobang.com

I was an experimental physical chemist at the National Chemical laboratory, Teddington from 1959 to 1992 producing accurate data for organic compounds of interest to industry. I married Pat in 1966, the year England won the football world cup. We have three sons and four delightful grandchildren. I used to be keen on sports, working my way through rugby, hockey and finally bowls. My wife was a bowls widow for many years but I did try to justify it by being county pairs champion twice and a finalist in the English nationals.

In the 1980's, the NCL was replaced by the Laboratory of the Government Chemist and I found myself in the unusual position of being able to work entirely alone for many years. I studied the surface energies of minerals, surfactants and biomedical implants and developed an empirical equation that differed from that in current use. My peers were not too happy about that and when my work was finally closed down I took early retirement.

I soon became bored at home and decided to seek a theoretical basis for my equation. This was not too difficult and I then spent the next ten years trying to disprove my theory. Not only could I find no faults with it I found the same theory explains atoms, forces, stars, galaxies, electricity, magnetism and gravity. Furthermore, it showed that the universe is not expanding but is now in a steady state.