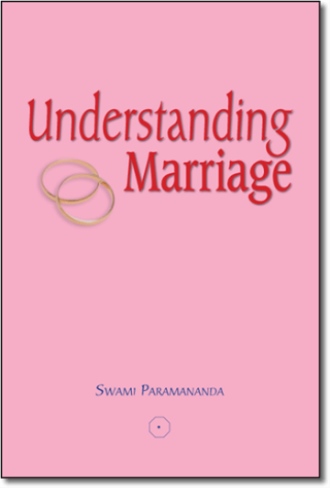 Marriage, which previously enjoyed a sacred place in human life, has lost its true worth to become a mere social convention and tradition. The degeneration of marriage, which is the basis of family life, has led to social ills we are facing today. Rising rate of divorce, adultery, jealousy, possessiveness and broken families are but a few of them.

For the situation to change, it is of paramount importance that people have a clear understanding of marriage and the responsibilities devolving from it. In his 17th book, Swami Paramananda exposes truths about marriage that are tactically avoided, supposedly not to hurt people’s sensibilities, regardless of the great harm it is causing to society. He goes in depth regarding the nature of man and woman, the differences between them and how they are irresistibly drawn towards each other.

What is the secret behind marriage? Why do we marry after all? Is it merely to imitate what others have always been doing? Is it for sex and children? Can we say that we marry to have company in old age? Maybe it is merely to follow social norms. In any case, young people are greatly induced into a dream world of fantasy and go for lavish marriage ceremonies, only to part shortly afterwards.

The whole of humanity is shrouded in ignorance related to marriage and sex. Swami Paramananda reveals the truth behind one of the most sublime stages of life, for marriage in its true sense is a means to attain the ultimate union and enlightenment.

Rajendra Prasad Dassruth, also known as Swami Paramananda, was born at Souillac, Mauritius on 8 October 1959. He is the founder and Spiritual Master of Satyam Gyanam Anandam Society. He is a prolific writer who has authored 17 books during the past 10 years and published over 21 issues of the ‘Know Thyself’ bi-annual magazine on meditation. His books have been very successful and some of them had to be reprinted more than once. Two of his very successful books ‘Man, God and the Universe’ and ‘Sex Breaking the Taboo’ have been translated into French and published in France by Editions ALTESS for the European market. Swami Paramananda is an accomplished meditation master who has a following of more than 1200 persons at the Prashant Ashram Meditation Centre at Dubreuil.

Swami Paramananda is well known for his ability to interpret complex spiritual truths in a simple and logical manner using a scientific approach. Besides regular meditation courses that Swami Paramananda gives around the island and in the United Kingdom, he is also much solicited by various organizations to deliver talks on various aspects concerning society and human evolution. He regularly participates in talks organized by other NGOs. Recently, he participated in an International Conference on “Integrating Spirituality and Organisational Leadership’ organized jointly by the University of Delhi and Regent University of the USA where he submitted a paper entitled ‘Spirituality and Good Governance’ which was published by Macmillan. He recently participated in another conference organized by Tomorrow People in Bangkok. He has also submitted proposals for educational reforms to Ministry of Education and Human Resource of Mauritius, which are under consideration.