Thyroid Hormone & the Origin of Species 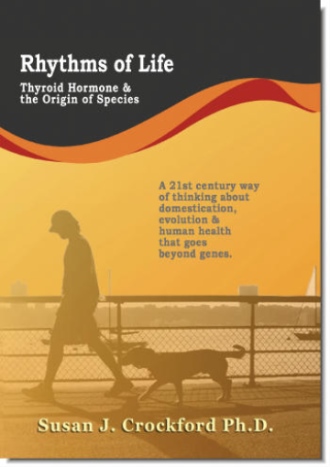 We know much less about how dogs and other domestic animals came to be, and how new breeds are developed, than most scientists will admit. The same is true about the process that turns any kind of wild animal into another: scientists know virtually nothing about how new species are actually generated. I've spent more than ten years investigating these issues and have made an exciting breakthrough that finally transcends the current preoccupation with genes. I discovered that a simple biological mechanism exists which explains precisely how wolves became dogs and how all animals, including our human ancestors, changed over time- something neither Darwin nor anyone since his time have done. Rhythms of Life explains fully, but without jargon, how animals transformed from one species to another using familiar and fascinating examples (including dogs, polar bears, extinct dodos, and the newly discovered dwarf hominid, Homo floresiensis)-and how this process continues to affect our daily lives.

I suggest that variations in patterns of thyroid hormone secretion (thyroid hormone rhythms) are key to both evolutionary change and human health. Thyroid hormone controls a huge variety of body characteristics and functions-including fetal growth, hair color, and the fight-or-flight response. Thyroid hormone has two essential jobs: controlling species-specific growth and keeping each individual body adapted to the conditions of light, temperature and food supply that vary with the seasons. My research suggests that thyroid metabolism also allows populations of individuals-species-to adapt to changing environmental conditions over evolutionary time. Moreover, since thyroid hormone is so critical to maintenance functions of the entire body, including the brain, this system also controls your day-to-day health.

My new theory provides such a revolutionary new perspective on our health that evolution suddenly becomes personal. Unravelling the conundrum of how wolves transformed into dogs becomes essential for explaining why each of our bodies function in slightly different ways as we grow and age, and why so many of us suffer from a host of increasingly common health problems, including depression, obesity, infertility, high cholesterol, hypothyroidism, and birth defects.

This is a truly testable scientific theory, peer-reviewed by well-respected evolutionary biologists. The concept is generating significant excitement within the scientific community because it takes Darwin's fundamental ideas to a whole new level. It not only provides the essential link between genes, individuals and the environment that's been missing from previous accounts, it has the power to transform modern medicine. Whether you're a dog-and-nature-lover or concerned with health issues, I guarantee this book will change the way you look at life.

Susan Crockford is a professional evolutionary biologist (B.Sc., Ph.D.) with a specialty in skeletal taxonomy and vertebrate evolution. She has spent almost 15 years studying the history and evolution of dogs and has 30 years experience in archaeozoology and forensic zoology with a private contracting firm (see www.pacificid.com ). She also holds an adjunct faculty position at the University of Victoria, in British Columbia, Canada.