The Ordeals of a Survivor 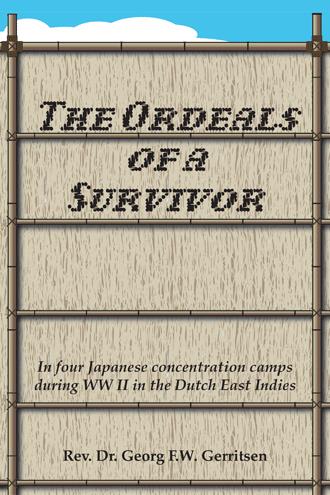 My personal experiences before, during and after WW II in the Dutch East Indies (Indonesia); some information about my family, and their ages in 1943; a map of the island of Java plus the locations of the concentration camps; afterthoughts; remarks; some drawings; a diagram of a camp; information about the atomic bombs; memorials; references; about the author.

Because I read a number of books on the activities of Albert Schweitzer in Africa, I was encouraged to consider the general ministry. My education was aimed toward that goal, and also you will find information about my family.

Born:
1934 in Batavia (Jakarta) of the Dutch East Indies (Indonesia)
One of six (6) children-two (2) boys and four (4) girls Father was a Dutch citizen; Mother was a German citizen, however on the date of her marriage (April 21, 1932) she became a Dutch citizen.
From 1942 to 1945 in the (four Japanese) concentration camps:
Bloemenkamp; Tjihapit; Moentilan (Muntilan); and Banjoe Biroe (Banju Biru).

Education and General Information:
Elementary Education in the Dutch East Indies (Called today: Indonesia); High School Education in the Netherlands
Private lessons to learn Latin in Toronto, Ontario, Canada Calvin College in Grand Rapids, MichiganÑAB General in 1959
Westminster Theological Seminary, Glenside, PennsylvaniaÑ Bachelor of Divinity degree in 1963. In 1974 the degree was turned into a Master of Divinity Temple University in Philadelphia, PennsylvaniaÑEducational
Psychology (3 undergraduate credits) in 1964 I worked as a janitor at the Headquarters of the United Presbyterian Church in Philadelphia, Pennsylvania
Part Time Associate Pastor at St. Mark's United Methodist Church in Newtown Square, Pennsylvania from 1964 to 1965
TeacherÑteaching German & French I at Valley Forge Military Academy in Wayne, Pennsylvania from 1963 to 1968
Guidance Counselor at Hatboro-Horsham Junior High School in Hatboro, Pennsylvania from 1968 to 1969
West Chester State College in West Chester, PennsylvaniaÑ GUIDANCE and COUNSELING (36 graduate credits) from 1967 to 1969
Part Time Associate Pastor of Haws Avenue United Methodist Church in Norristown, Pennsylvania from 1967 to 1969 I worked for Bristol-Myers and Wallace Pharmaceutical companies as a salesman in the state of Michigan from 1969 to 1972
Full Time Pastor of the United Methodist Church in the state of Michigan from 1972 to December 1999
San Francisco Theological Seminary in San Anselmo, CaliforniaÑDoctor of Ministry in 1980Ñthesis or dissertation project: "THE THEOLOGICAL ANTECEDENCE IN CRISIS COUNSELING" (subjects in DEATH, DIVORCE, TERMINAL ILLNESS AND SUICIDE)

Children: Greg David
In January of 1971 our adopted son (Greg David) became part of our family.
He was born on November 20, 1970 in Flint, Michigan. Presently, he lives in Michigan.