"F" is for Fishing

by Larry Barker, With Joshua Jones & With Sarah Jones 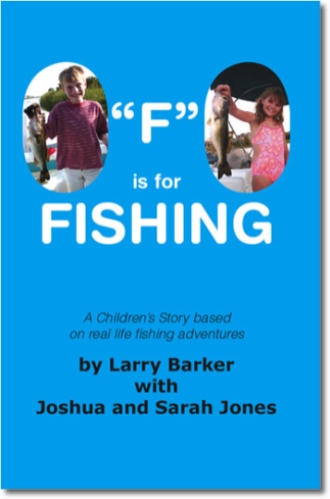 "F" is for Fishing began with a fishing trip. Larry and Melissa Barker invited Sarah and Josh Jones on a fishing trip on Lake Tarpon, Florida, about two years ago.

Their grandmother, Marje Monach, Melissa, Larry and the two children had a great time on the lake that day. The children each caught their first fish and were "hooked" from then on.

Larry has been a tournament bass fisherman and outdoor writer for years, and asked Josh and Sarah if they would like to help write a children's book about bass fishing. The children had no idea at the time what they were getting into, but both said "yes!" without hesitation. Over the past two years, the authors, Larry, Josh and Sarah have taken several exciting fishing trips. The photos at chapter openings were taken on some of those trips.

The writing process developed over time. The first few sessions involved talking through some of the possible topics to include in the book. After each session, Larry would write a draft and both children would read it and suggest improvements. Eventually, Marje, Melissa and her mother, Pat Fisher, became involved in the editing process. After many drafts and numerous inputs from all contributors, the book was completed. At this writing Sarah is 11 years old and Joshua is 13. They live in Clearwater, Florida. In addition to fishing, Sarah loves acrobatics. Joshua enjoys computer games and the outdoors. Both are enthusiastic readers.

Although some parts of the book are completely fi ctional, many scenes are based on real life fishing adventures. We hope that you enjoy reading the book as much as we enjoyed fishing and writing it!

Larry Barker, Ph.D., is an avid tournament fisherman and outdoor writer. He has published over 25 books and 100 articles on topics ranging from "Listening" to "Bass Fishing". He has been interviewed on ABC's 20/20 and NBC's The Today Show. The editors of North American Fisherman gave him the nickname 'Dr. Bass", because of the high number of trophy bass he caught and released during 2004. One of Larry's greatest pleasures is introducing children to the joys of fishing.

Joshua Jones is 13 years old and lives in Clearwater, Florida. he caught his first fish with Larry when he was 11. He loves the outdoors and is an expert at computer and video games.

Sarah Jones, Josh's sister, is 11 years old and also lives in Clearwater. She caught her first fish with Larry when she was nine. She is an outstanding gymnast and loves to read.