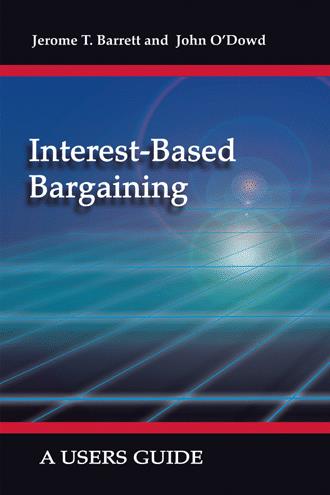 Interest-Based Bargaining: A User's Guide provides a detailed account of why it makes sense to negotiate on the basis of interests rather than positions. It provides a detailed set of guidelines for negotiators who wish to develop a cooperative, problem solving approach to their bargaining. It draws on the experiences of using interest-based approaches in the USA and Ireland.

Interest-based bargaining is an approach to collective bargaining that is focused on understanding the interests of parties and on building solutions around these. It uses problem-solving tools such as brainstorming, flip charting and consensus decision-making. This book will be of particular value to management and union representatives who are already working in a cooperative way and who wish to deepen that cooperation.

John O'Dowd is a consultant and facilitator specializing in industrial and employee relations. Much of his work lies in helping employers and trade unions to work together to develop better industrial relations and to develop effective ways of handling change together in the workplace. Through John O'Dowd Consultants Ltd (www.johnodowd.com) he provides a range of consulting, training, facilitation and mediation services to employers and trade unions. His website is www.johnodowd.com. He brings to his work a deep practical and theoretical understanding of industrial relations and organisational change.

From 1997 to 1999 he was Joint Director of the National Centre for Partnership, based in the Department of the Taoiseach. In that role he was responsible for the promotion and facilitation of partnership in a range of organizations across the public sector, including health boards, local authorities, commercial state companies, universities, government departments and others. He developed the first standardised training materials for newly formed partnership groups in the public sector. He published Employee Partnership in Ireland (Oak Tree Press) in 1998 and Organisational Change through Partnership: Promise, Performance and Prospects for Irish Firms (The Liffey Press, Dublin in 2010.

He was Assistant General Secretary of the Association of Secondary Teachers Ireland from 1980 to 1988. He was General Secretary, Civil and Public Service Union from 1988 to 1997. During that time he was also a member of the Executive Council of the Irish Congress of Trade Unions and took part in the negotiation of national programmes.

He is a graduate of University College Dublin (UCD). He has a BA in English and French, a Higher Diploma in Education, and a PhD. He also holds an MBA from the Open University Business School. He blogs on industrial relations and organisational change at http://johnodowdconsultants.wordpress.com/