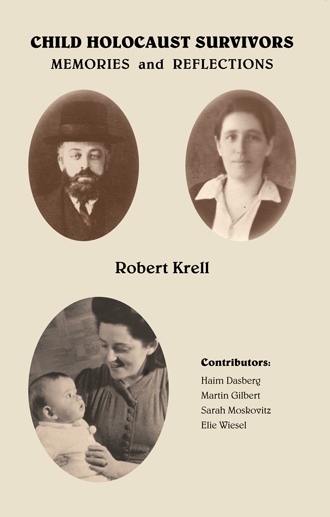 The majority of children who survived the Holocaust, whether in hiding or in labour and concentration camps, remained silent about their wartime experiences.

Those who wanted to talk, were often silenced by well-meaning adults who advised them to forget the past and get on with their lives.

The memories and traumas simmered for nearly forty years, each child growing into adulthood thinking they alone struggled with the problems of traumatic memory, identity confusion and other consequences.

In the 1980's, there was a stirring of awareness amongst some child survivors about issues to be addressed. Small groups formed in the U.S.A. and Canada and gave birth to the child survivor movement, culminating in a large international gathering of "Hidden Children" in New York in 1991.

This book comprises a compilation of talks offered to child Holocaust survivors, over a 25 year period - from the birth of self-awareness to present day awareness of the need to inform the next generations of their parent's experiences.

Dasberg, Krell and Wiesel are themselves child survivors. Moskovitz founded the Los Angeles Child Survivor group following her pioneering study of child survivors. Gilbert has written and lectured extensively about children in the Holocaust.

This book offers the child survivor an opportunity to reflect not only on survival but its effects. For the spouses and children it clarifies some of the dynamics unique to their families and for Mental Health professionals it provides insights into the effects of trauma as well as the remarkable resilience of traumatized children.

Dr.Robert Krell was born in The Hague, Holland on August 5th 1940. He was hidden with a Christian family from 1942 to 1945 during the Holocaust. After the war ended he was returned to his parents who also survived in hiding.

In 1951, he moved with his family to Vancouver, B.C. where he obtained an M.D. from the University of British Columbia, (UBC) and served as Professor of Psychiatry until 1995, when he became Professor Emeritus.

During these years, driven to give a voice to those who survived the Holocaust, he not only co-founded in 1975, the annual BC High School Symposium on the Holocaust but in 1978 initiated the audiovisual documentation project on Holocaust survivors in the Vancouver area. Robert helped form child survivor groups in Los Angeles and Vancouver in 1983. In 1985 Robert founded the Vancouver Holocaust Centre Society for Education and Remembrance which built a memorial in 1987 and established a Holocaust Education Centre in 1994. This Centre reaches 25,000 students annually. For these activities he received in 1998 the State of Israel Bonds Elie Wiesel Remembrance Award.

Robert also served on the International Advisory Council of the Hidden Child Conference that organized the 1991 gathering in New York as well as volunteering with the Canadian Jewish Congress - Pacific Region, becoming its Chair and then National Vice President. (1986-1992)

Robert Krell has co-edited and authored numerous books, book chapters and articles. He is invited to speak around the world on the impact of the Holocaust on child survivors, their memories and reflections. Robert is married and has three children and five grandchildren.