In the Image of God and the Shadow of Demons

A Metaphysical Study of Good and Evil 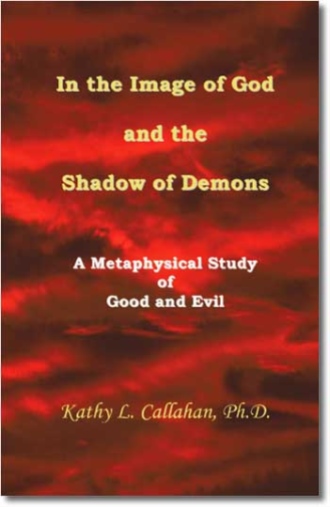 As Americans, we have long considered ourselves to be members of a literate and secular society that prides itself on the triumph of logic and reason. We have long minimized the reality of evil and distanced ourselves from beliefs in Satan and demonic forces. The events of September 11, 2001, however, brought Americans face to face with personal evil, and served as a wake-up call that demonstrated the devastating effects that the power and influence of evil can cause. Since that fateful day, many Americans have reexamined their beliefs and sought for a clearer understanding of the what, how, and why of evil.

The primary purpose of this book is to help readers come to a more complete understanding of the nature of good and evil (the what), the origin of evil and its place in the universe (the how), and the role evil may play in our spiritual development (the why). The study of good and evil, however, is a complex issue at best, infused with emotion, and often obscured by a relative subjectivity based on personal beliefs, religion, and morality. In order to overcome the relative aspects of such a study, the author uses a cross-cultural approach that seeks to examine good and evil from a traditional viewpoint as well as through the interpretive lens of metaphysics.

The combination of cross-cultural comparison with metaphysical interpretation provides a holistic framework from which to study the physical, mental, and spiritual aspects of good and evil. It enables the reader to move beyond a limited, egocentric view and understand good and evil from a universal or divine perspective.

The material presented in Part One focuses on the "what" of good and evil. It is thus drawn from a wide selection of philosophies, mythologies, and religious doctrines. It includes a survey of the ways good and evil have been defined throughout history, both as abstract principles and as personalized expressions of the divine. The material is drawn from the works of Taoism, Plato, Stoicism, Hinduism, Zoroaster, Buddhism, and the Judaic-Christian tradition. There are discussions of gods, demons, and angels, and a thorough examination of the historic development of Satan. The ideas of secular thinkers and their thoughts on good and evil in human nature are also examined.

In Part Two, the focus turns to the "how" and "why" of evil. As the book shifts focus, the author explains that before we can understand the how and why of evil, we must first understand ourselves—who we are, why we were created, and our place in the universe. This examination is done from a metaphysical perspective by using the material contained in the Edgar Cayce readings. Following this, the author discusses the expression of good and evil as universal forces, and explores the origin of evil in the spiritual dimension and in the physical world. The author also considers the unique idea that Satan is a soul who played a key role in bringing evil into the spiritual and physical planes. The author addresses the reality and power of evil as well as the idea that evil may indeed serve a positive function in our spiritual development. The book concludes with suggestion on to how to apply the lessons learned a means to make the right choices that will help humanity oppose evil and overcome it.

Author and lecturer, Kathy L. Callahan, Ph.D., is a career Naval officer. She has an educational background in Anthropology, with an M.S. and Ph.D. from Purdue University. She wrote her doctoral thesis on alcoholism treatment among the urban Tohono O'Odham (Papago Indians). She has been a student of the Edgar Cayce readings for over 30 years, and has presented workshops at A.R.E. Headquarters and field conferences. She has also been a student of A Course in Miracles for 13 years. She teaches courses and workshops on a variety of subjects including the Universal Laws. She is a frequent speaker at Unity Churches and has appeared on radio and television including Sightings and The Unexplained. Her other books include Unseen Hands and Unknown Hearts, which tells the story of her daughter's miraculous healing from a life-threatening illness, Our Origin and Destiny, an Evolutionary Perspective on the New Millennium, which discusses the development of the multisensory human, and Living in the Spirit, Applying Spiritual Truth in Daily Life, a how-to book on the practice of spiritual truth as a means to create good in your life. She currently resides in Fairfax, Virginia.

Table of Contents and Excerpts

excerpts from the Author's Foreword

Until recently, many Americans gave little thought to questions of good and evil. Such philosophical issues simply did not play a significant role in our daily thoughts. There may have been a headline or a certain news story that may have caused us to wonder, just for a moment, about the evil we see in this world. We live in a secular world, however, and our concerns are mundane ones. The challenges of daily life are simply too overwhelming to allow us much time to reflect on philosophical issues. The events of September 11, 2001, however, changed that.

...I believe that one of the most significant aspects of the September 11th terrorist attacks is that it brought Americans face to face with evil, perhaps for the first time in our lives. I don't mean to imply that we weren't aware of evil prior to this. Our recent experiences with evil, however, have been with what I call remote evil and insane evil...

...The events of September 11th brought us face to face with another kind of evil—personal evil. As President George W. Bush said in a speech given that fateful day, "...our nation saw evil...." We truly did experience evil in a way we never had before.

...Personal evil is much more difficult to deal with than remote or insane evil because it directly touches our lives...

...Interest in good and evil reached an all-time high in this country as people asked the question:

If we are truly created in the image of God,
how can we yet walk in the shadow of demons?

...When faced with the personal evil of September 11th, previously held beliefs that minimized the reality of evil and sin were shaken. Given the resurgence of evil that now threatened our very way of life, evil did indeed seem real.

This confrontation with evil was equally perplexing for those who held a spiritual view of life that regarded evil as a function of ignorance, error, or even an illusion. This view of life holds that evil was not a part of God's original creation but results from an erroneous perception that is acted upon out of ignorance. Since evil is not a creation of God, it is therefore not real in the sense that it is not eternal.

While evil may not be real in the sense it was not created by God, the power of evil is very real and can cause great chaos and destruction. For evil results when we misapply our creative abilities in defiance of Divine Will and Universal Law. As co-creators with God, our creative abilities are very potent. We not only can create worlds, we can also destroy them.

...There is a connection between the cosmic forces of good and evil and their manifestations on the earth plane. This connection goes back to the very moment of rebellion by a soul against the Creative Force. It is this moment of rebellion that is the fundamental truth which underlies the stories of the war between the sons of light and the sons of darkness, as told in myths throughout the world.

This is a war that first began on the spiritual plane and was later carried over into the physical world. It is a war waged against spiritual truth by those beings who choose self-interest over the greater good of the human community. It is a war against love, joy, peace, and compassion, by those who choose fear, hatred, and anger. It is a war that has been has been repeatedly played out in the history of humankind by the manipulators of the human body, mind, and spirit. It is this perpetual conflict between good and evil, order and chaos, light and darkness, which was played out once again in the terrorist attacks of September 11, 2001.

...We can no longer ignore evil or underestimate its power and influence. Evil is rebellion against the Creative Force. It is the rejection of our true self as a companion and co-creator with God in favor of a false, separate identity. It is a denial of the Divine plan of the universe in favor of selfish interests. By minimizing evil, we allow its separation paradigms to flourish and keep humanity chained to a separation consciousness. We perpetuate the erroneous belief of "specialness" that leads to division, dissent, and greed. We accept the lie that tells us we are less than we were created to be.

We must recognize evil for the error it is and take every opportunity to replace error with truth, the truth of who we are and what we were created to be. As companions and co-creators with God, we must choose to "become who we are" and do our part to aid the forces of light in their battle against the darkness.

excerpts from the Introduction

It is clear from the preceding discussion that the study of good and evil is a complex issue at best, characterized by a relative subjectivity, and all too often debated with emotion rather than reason. One way to minimize the relative aspects of good and evil is to apply a cross-cultural approach. Used for over a century in anthropological studies, this methodology considers material from a number of cultures, distinctive in time and space. The material is then examined through a comparative analysis that seeks to identify shared themes or patterns, also called archetypes.

...As a complement to cross-cultural comparison, we will also examine good and evil through the interpretive lens of metaphysics. Metaphysics refers to the branch of philosophy that attempts to understand the fundamental nature of all reality. This includes the material world we perceive with our five physical senses and the unseen world of energy (or spirit) that exists beyond our physical perception...

A metaphysical approach considers an issue from a factual perspective and then evaluates it in terms of symbolic meaning, mental states of consciousness, and spiritual awareness. For this reason, some people consider metaphysics a type of spiritual p