So They Tell Me

Surviving Kidney Cancer and a Stroke 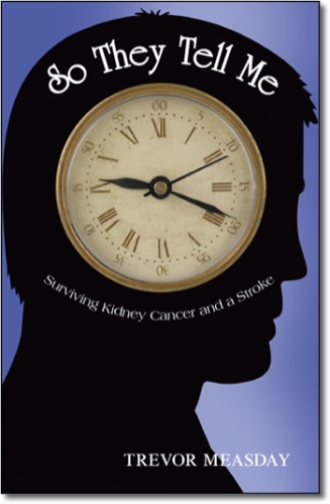 How many people prepare for one traumatic experience in their lifetime and the possible lifestyle changes they may have to live with? This book describes two such experiences in a matter of weeks suffered by a couple who were in their early fifties, with two sons who were making their way in the world. An opportunity to set up home in the south west of England had occurred three years earlier. Life was most enjoyable, they had never considered how they would handle the series of traumas that occurred in April 2003 and a third related trauma in May 2004. It is written in a practical way, to serve as a "Self-help" book. There are many false trails that can be followed and there is no exact way to rebuild lives following traumatic experiences. This book describes how this couple went about working their way back to a reasonable, but not the same lifestyle they were used to before the traumas they endured.

This book describes one way that has worked. It highlights that the most obvious routes for help are not always successful. Excellent medical treatment, positive thinking, support of family and friends and setting short, medium and long term goals are key ingredients for success.

Trevor Measday
I was born in Canterbury, Kent on 23rd March 1950 and grew up on a farm, where my parents worked. I worked on the farm in my school holidays this provided me with valuable experience of working life, ahead of when I left school to start work. My sister was five years older and pursued a career in the Womens Royal Naval Service.

I had a most enjoyable career in the Electricity Generation Industry, mostly working in nuclear power plants as a maintenance engineer.

In 1971 I married my childhood sweetheart. In December 1974 and January 1977 we had sons who proved to be a credit to us and provided tremendous support to my wife during the period I was seriously ill.

The decision to write this book stems from the need for me to exercise my brain and upper body limbs as part of my recovery therapy also to serve as a stimulus to help others in similar circumstances.

Lesley Measday
I was born in Maidstone, Kent on 4th January 1952 and grew up in Ashford Kent where my parents ran a driving school. I was the youngest of three children having an elder sister and brother.

I, like Trevor, hope this book will provide help and guidance for people who find themselves in similar positions. I am sure there is more than one way of recovery from a serious illness. I encourage everyone to keep brief notes of the highs and lows of each day. Without these notes it would not have been possible to write this book or reflect on those difficult times today.