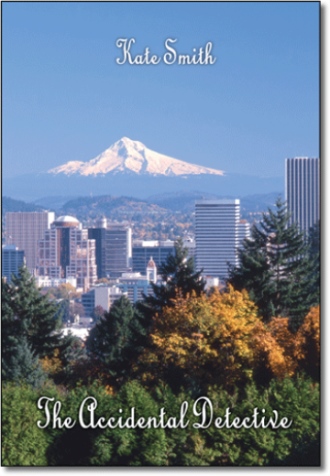 He is driving north on Interstate 5, in his red BMW convertible with the top down, when suddenly there drops onto the front seat beside him a miniature apricot poodle. The dog apparently fell from the bridge on Terwilliger Boulevard. The dog looked hurt, possibly badly injured. Not knowing what else to do, how else to get rid of the dog, Wort drives him to the Dove Lewis Animal Hospital. After only a few minutes, the veterinary returns the dog to Wort. "There's nothing wrong with your dog. He was just stunned. He's going to be fine." Wort thinks, "He's not my dog. I don't want a dog. I'll have to find his owner." Then it hits him! That's what private detectives do; they find stuff. He could be a private detective. That's a profession. What's required to be a private detective? In Oregon there is no licensing requirement to become a private detective. All you need is an office with a sign on the door, and maybe a trench coat. It rains a lot in Oregon. He had found his profession! He would be a detective. He had his first case, a missing dog case. He would find the owner of the dog.

Finding the owner of the little poodle should be easy. The dog has a tag. Engraved on the tag is the dog's name and address. The dog's name is Fluffy, appropriate since it is a little fluff. All Wort thinks he has to do is find the address, somewhere in Dunthorpe. First case solved. Proof of profession established.