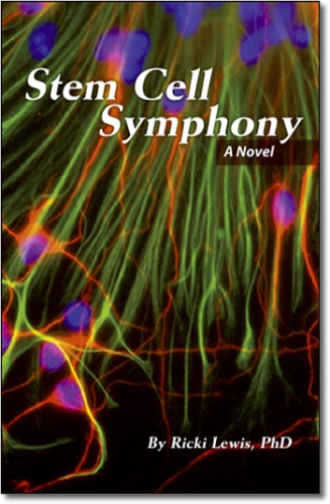 Stuart Matheson, 32, is trapped in a nursing home as well as his body, eerily immobile at the last stage of Huntington's Disease. Kelsey Raye is a science writer feeling guilty about the recent deaths of her parents. She volunteers for hospice and is assigned to Stuart. She's a PhD, he never finished school, but they share a love of rock music and disdain of religion. They instantly bond.

As Kelsey plays her iPod daily for Stuart, he improves - an impossibility - and when she misses a few days, he backslides. She deduces that Stuart's gains follow hearing U2 or their imitators. Kelsey, who writes about stem cells, thinks the frequency of the arpeggios is turning on stem cells in Stuart's brain. She shares her idea with researcher Peter Holloway, but evil Nurse Smithies overhears and outs them to a tabloid. Meanwhile, Peter scans Stuart's brain. He's getting better!

All hell breaks loose when the tabloid hits. The government shuts down Peter's lab and confiscates Kelsey's iPod, while anti-stem cell protestors harass them -- just as Peter discovers how music stimulates stem cells. Then something unexpected happens. Did science fail, or was it the anti-science forces?

The underlying love story and comical cast of characters propel this parallel tale of emerging spirituality and an evolving medical technology. Many of the characters and scenes are based on real people, and the science dead-on accurate - with the one tweak of the music turning on stem cells.

Ricki Lewis is a science writer with a PhD in genetics from Indiana University, where she worked with flies that had legs growing out of their heads due to mixed up stem-like cells. She's published thousands of articles in a range of places, from magazines and medical journals, to encyclopedias, annual reports for biotech and pharmaceutical companies, technical biotechnology reports, pet care and women's health pamphlets, book reviews, a bioethics blog, and a screenplay. Her articles have appeared in Discover, Nature, Science, The Scientist, Genetic Engineering News, The FDA Consumer, and Applied Neurology. Ricki has been a genetic counselor at an ob/gyn practice since 1984, and has taught various biology courses at SUNY Albany, Empire State College, and Miami University. She is author or co-author of four life science university-level textbooks published by McGraw-Hill Higher Education and an essay collection published by Blackwell. Her textbook "Human Genetics: Concepts and Applications", is in its eighth edition and widely used throughout the U.S. She is a hospice volunteer and a frequent public speaker. Ricki is married to Larry, a chemist, and has three daughters, many cats, a tortoise and a hare.