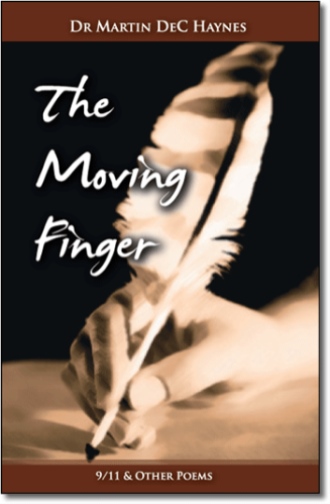 Part 2 deals with the horror of 9/11 from when the first tower in New York was hit with a jet skyjacked by Atta, then the second tower in similar fashion with the attendant carnage....then the revelations about the perpetrators and other terrorist acts that came beforehand...about bin Laden and Al Quaeda and their training camps in Afghanistan... about the formation of individual small, tightly knit groups, each called a cell...about Reid of G.B. and Walker Of USA who joined the group, about the bio of bin Laden going from Saudi Arabia to Afghanistan, back to Saudi Arabia, then Somalia, then back to Afghanistan... about the U.S. air raids on Afghanistan in response to 9/11.

Part 3 deals with the well known stories of the Old Testament, from Moses' crossing of the Red Sea onwards, including a long poem on the wiles of Tamar and she disguised herself as a veiled harlot to trap her father-in-law along the highway, and conceived, and thus squeezed herself onto the pages of history. Part 4 deals with the New Tesament from the birth of Christ, most of his miracles including those to do with healing...about his arrest and crucifixion and what happened after.

Part 5 deals with Clerihews, two rhyming couplets which encapsulate an important event or personality ...also with words making up five syllables in all, followed by a second line of seven syllables and finally by a third line of five syllables. Also with poems about life, marriage, love, fun, the four seasons, a folktale called Devil's Woodyard, a few poems on animals, the manatee, the pangolin, lizards including the famous basilisk and finally the vicious giant hornet.

The whole collection is really a delighful opus magnum.

Born on the island of Barbados in the West Indies, Dr. Martin DeC Haynes attended Harrison College and emerged as an Island Scholar in Classical Studies. He went on the study Medicine at the University of Edinburgh, Scotland. He stayed on to do postgraduate studies and obtain the specialist surgical degree, F.R.C.S. He returned and worked as a surgeon in Trinidad for thirty-seven years, for the last twenty of which he felt impelled to write poetry, short stories and novels, he has in the making a manuscript of puns and a book, Surgical Chronicles of Trinidad, which the Society of Surgeons of Trinidad and Tobago has asked him to write, excerpts of which will appear on their website. In addition to being a surgeon and writer he is also a linguist, a humorist and a keen golfer. He has two daughters and lives in Trinidad, West Indies, with his wife, Gillian.